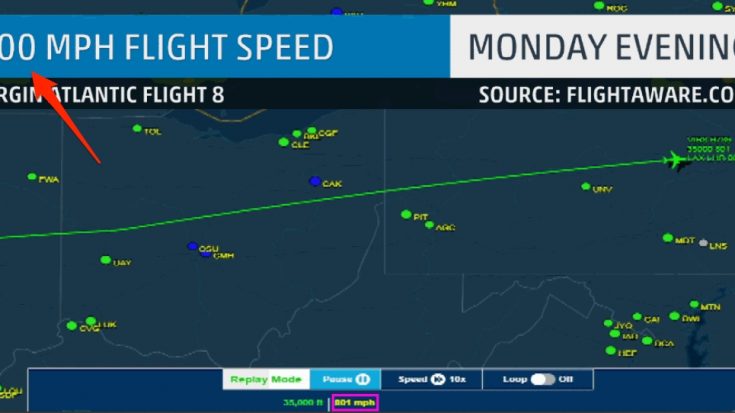 Apparently, the winter jet stream above Pennsylvania has been in a bit of a hurry. On Monday, February 18, it carried a Virgin Atlantic flight at a ground speed of at least 801 mph. An airliner will typically cruise around 560 mph. The speed of sound is roughly 767 mph.

For one, breaking the sound barrier over land in a commercial jet is illegal. Second, it’s unsafe and nearly impossible to do.

On the Jet Stream

That #jetstream! ?️ Highest wind speed at 250 millibars in the period of record for those locations near NYC, and for a jet ✈️ over PA last evening an *801* mph ground speed #wow (h/t @gdimeweather, https://t.co/MIqBu7mHNf) pic.twitter.com/RaL2HRQ5Z1

But the Virgin Atlantic flight didn’t break any rules and the passengers and crew were never in danger. Actually, despite the speed, they didn’t even come close to breaking the sound barrier. The airliner simply rode the jet stream.

It’s like the moving walkway at the airport. You have your own forward speed, but if you continue this velocity in an environment that is itself moving, it can propel you at an impressive rate…Despite a ground speed that high, the plane didn’t come close to reaching that threshold because it was embedded in the swiftly moving air.

So, there was no sonic boom, but it’s still pretty cool that a commercial jet was able to travel so quickly and still be completely fine.

As a bonus, the Virgin Atlantic flight traveling from Los Angeles to London arrived in London almost an hour early.

The bad news is that if you’re traveling from east to west, you’ll be flying against the wind and you’ll likely be late.

Below is a forecast of more winter weather to come.