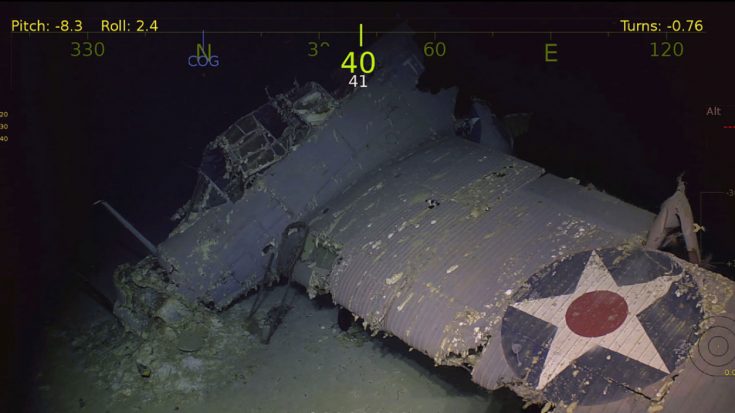 In early February 2019, late Paul Allen’s exploration and conservation company Vulcan Inc. has done amazing work around the world. From pioneering expeditions to protecting wildlife, this umbrella company accomplished things no other corporation has.

“As long as we work together – with both urgency and determination – there are no limits to what we can achieve.”

A big part of the company is operating R/V Petrel. This remote-controlled submarine has discovered many World War II wrecks to date, 21 to be exact. The team’s mission is “finding and documenting historic shipwrecks” but it’s the response of the families of those lost that humbles them most and drives them to find more ships.

Since 2012, these are the ships R/V Petrel found and documented (sorted by depth:)

The bridge from the IJN Asagumo seen at 181 meters under the water with our 6000m depth rated ROV. . . Found with our multi beam sonar days earlier, we explored this wreck on November 24, 2017. . This Asashio Class destroyer was the southernmost wreck we found in Surigao Strait leading us to believe it was the IJN Asagumo. It is upright but is showing the signs of being in fairly shallow water for the last 70+ years. . The Asagumo was struck on October 25, 1945 by a torpedo fired from the destroyer USS McDermut and eventually sunk with naval gunfire during the Battle of Surigao Strait. . . #rvpetrel #marine #ocean #picoftheday #oceaneducation #blueplanet #marineconservation #KnowYourOcean #searesearch #researchvessel #oceanscience #rov #auv #shipwreck #offshore #marinetechnology #autonomousvehicle #autonomous #robot #underwaterrobot #marineoperations #ship #ww2 #worldwar2 #surigaostrait #battleofsurigaostrait #usnavy #IJNAsagumo #philippines #destroyer

A propeller from the 192m (630 ft) long battehship the IJN Fuso. . . The image was taken at 184 meters under the water with our 6000m depth rated ROV. Found with our multi beam sonar days earlier, we explored this wreck on November 25, 2017. . . All 4 propellers and rudders are intact and visible. This propeller is 3.5 meters in diameter. . This image of Fuso is from the ROV navigation computer showing the ROV at the very stern of the ship. We have accounted for the entire length of the ship but it is upside down. The pagoda is 60 to 70 meters away from the ship and not in this image. . The Fuso was sunk by a torpedo in the early hours of 25 October 1944 by torpedoes and naval gunfire during the Battle of Surigao Strait. . #rvpetrel #marine #ocean #picoftheday #oceaneducation #blueplanet #marineconservation #KnowYourOcean #searesearch #researchvessel #oceanscience #rov #auv #shipwreck #offshore #marinetechnology #autonomousvehicle #autonomous #robot #underwaterrobot #marineoperations #ship #ww2 #worldwar2 #surigaostrait #battleofsurigaostrait #usnavy #IJNFuso

Photo 1: 127 mm (5 inch) guns of the Yugumo-class destroyer the IJN Hamanami. . . . She was sunk by American aircraft on 11 November 1944. . Photo 2: While leaving Ormoc Bay last November in we found this target in the ship’s mutibeam sonar. The Petrel returned to Ormoc in the new year and explored the wreck with our ROV on 20 January 2018. . Our local historian Jake Miranda (@isla_diver) identified the wreck as the Hamanami based on the gun configuration and torpedo launchers. The ship had two 127mm turrets aft and 1 forward. . Photo 3: The stern section of the ship has collapsed. . Photo 4: One of the 25mm anti-aircraft mounted on the stern. . Photo 5: You can see the struts for shaft and the tip of the propeller sticking out of the mud. . Photo 6: The aft most torpedo launcher. The ship appears to be split at the forward torpedo launcher. Also visible is a rangefinder for the torpedo launcher and an anti-aircraft gun laying on top of the torpedo launcher. . Photo 7: Hamanami underway on 10 October 1943 . #rvpetrel #marine #ocean #picoftheday #oceaneducation #blueplanet #marineconservation #KnowYourOcean #searesearch #researchvessel #oceanscience #rov #auv #shipwreck #offshore #marinetechnology #autonomousvehicle #autonomous #robot #underwaterrobot #marineoperations #ship #ww2 #worldwar2 #usnavy #IJNHamanami #philippines #ormocbay #ormoc #shiplife

Our latest find–the USS Helena. We found her 860 meters below the surface, resting on the floor of the New Georgia Sound off the coast of the Solomon Islands. You have to read more about this ship because few ships have a history like Helena's. Beginning in Pearl Harbor and ending in an heroic rescue seemingly too dramatic to be true, her story is one truly of valor and perseverance. Copy and paste this link to learn more http://vlcn.fyi/MOdF30jrmMm . . . #rvpetrel #marine #ocean #picoftheday #searesearch #researchvessel #oceanscience #rov #auv #shipwreck #offshore #marinetechnology #autonomousvehicle #autonomous #robot #underwaterrobot #marineoperations #wwiihistory #wwii #usshelena #WW2

New R/V Petrel discovery! Battleship IJN HIEI . . The first IJN battleship to be sunk during WWII on November 14, 1942 has been found by R/V Petrel. HIEI was crippled by a shell from the USS San Francisco on the 13th which disabled the steering gear. For the next 24 hours it was attacked by multiple sorties of torpedo, dive and B-17 bombers. Hiei sank sometime in the evening with a loss of 188 of her crew. HIEI now lies upside down in 900 plus meters of water Northwest of Savo Island. . . Photo 1: 127 mm (5”) gun in the debris field. . Photo 2: Portholes in the hull. . Photo 3: Outer port propeller and shaft that has slid out all the way to the cutlass bearing. . Photo 4: Damage from the battle as well as degaussing wire and a porthole. . Photo 5: Found in the debris field about 500 meters away from the ship. Possible base for one of the rangefinders. . Photo 6: Expedition leader Robert Kraft reviewing sonar data of HIEI. . Photo 7: A crate of 25mm anti-aircraft on laying on the capsized hull. . Photo 8: View looking forward at both rudders over to starboard which matches the historical account. . Photo 9: Another 127 mm (5”) gun in the debris field. . . Follow us on Facebook for more images of IJN HIEI and other R/V Petrel projects. . . #rvpetrel #marine #ocean #picoftheday #searesearch #researchvessel #rov #auv #shipwreck #offshore #marinetechnology #autonomousvehicle #autonomous #robot #underwaterrobot #marineoperations #robotics #teampetrel #shiplife #paulallen #vulcan #solomonislands #ironbottomsound #savoisland #battleofsavoisland #ijnhiei #ijn #wwiihistory #wwii

Images of a torpedo found laying in the seabed near the wreckage of the USS Lexington . . . We believe this is one of the five fired by the USS Phelps to scuttle Lady Lex. Two of those torpedos were reported to be duds . . Stay tuned for more photos and videos of Lady Lex. . Link in bio for more information or check out our Facebook page. . Follow @officialpaulallen for more news from Paul Allen. . #rvpetrel#marine #ocean #picoftheday #oceaneducation #blueplanet #marineconservation #searesearch #researchvessel #oceanscience #rov #auv #shipwreck #offshore #marinetechnology #autonomousvehicle #autonomous #robot #underwaterrobot #marineoperations #usslexington #ladylex #usslex #lexington #usnavy #wwii #worldwar2 #ww2 #cv-2 #cv2

World War II ship USS Juneau discovered on St. Patrick’s Day! . . Our latest find, WWII light cruiser USS Juneau. She was found on 4,200 meters (about 2.6 miles) below the surface, resting on the floor of the South Pacific near the Solomon Islands. . We certainly didn't plan this, but we located Juneau on St. Patrick’s Day—an unexpected coincidence since she is best known for the Sullivans, 5 Irish-American brothers who were among the 687 sailors lost at sea. Only 10 survived the sinking. . Image 1: The prop of the USS Juneau. . Image 2: USS Juneau in New York harbor, 11 February 1942 . Image 3: A 5” gun from the Juneau. . Image 4: The Sullivan brothers on board the USS Juneau, 14 February 1942 From left to right: Joseph, Francis, Albert, Madison and George Sullivan . Link in bio for more information on the USS Juneau (CL-52) or check out our Facebook page for videos and updates. . Follow @officialpaulallen for more news from Paul Allen. . . #rvpetrel #picoftheday #oceaneducation #searesearch #researchvessel #rov #auv #shipwreck #marinetechnology #autonomousvehicle #autonomous #robot #underwaterrobot  #usnavy #wwii #worldwar2 #ww2 #southie #sullivanbrothers #ussjuneau #thefightingsullivans

A photo of a 5 inch gun from the ROV exploration of the wreck of the USS Indianapolis at a depth of 5500m (18,000 ft) . . . The crew of the R/V Petrel found the wreck of the Portland Class heavy cruiser USS Indianapolis on Aug. 19 2017 using a Hydroid Remus 6000 AUV equipped with an @edgetech_marine sidescan sonar. . Commissioned in November 1932, the USS Indianapolis (CA-35) was a 9,800-ton Portland Class heavy cruiser that operated in the Atlantic and Pacific during the peacetime years. During World War II, the Indianapolis served with honor from Pearl Harbor earning 10 battle stars and frequently operated as the flagship of the Fifth Fleet. . The loss of USS Indianapolis (CA-35) was a tragic moment following the completion of a secret mission, which contributed to the end of World War II. After a successful high-speed run delivering crucial components of the first operational atomic bomb, “Little Boy” from California to a naval base on the Pacific island of Tinian. The cruiser was en route from Guam to Leyte when she was torpedoed by Japanese submarine I-58 in the early hours of July 30, 1945. . The U.S. Navy cruiser tragically sank within an hour. Due to communications and other errors, her loss went unnoticed until a passing aircraft spotted survivors several days later. Approximately 800 of the ship’s 1,196 sailors and Marines survived the initial strikes and sinking, but after 4 to 5 harrowing days and nights drifting at sea, only 316 men survived. The Indianapolis remains to be the most tragic maritime disasters in U.S. naval history. . Read more at https://www.paulallen.com/uss-indianapolis-history-and-discovery-materials/#E7Ge5QS6dWSIh3WB.99 . . #rvpetrel #marine #ocean #picoftheday #oceaneducation #blueplanet #marineconservation #KnowYourOcean #searesearch #researchvessel #oceanscience #rov #auv #shipwreck #offshore #marinetechnology #autonomousvehicle #autonomous #robot #underwaterrobot #marineoperations #ship #ussindianapolis #worldwar2 #ww2 #usnavy

These photos show how far in the soft seabed the USS Hornet (CV-8) is buried. . . Photo 1: The 8 that helped us positively identify the Hornet. The camouflage paint scheme is still visible. . Photo 2: This is the hangar deck on the main part of the ship on the starboard side. You can see Hornet is nearly buried up to the hangar deck. . Photo 3: Possible damage from a torpedo or impacting the seafloor. The hangar deck visible at the top of the photo. . Photo 4: This photo of Hornet gives you an idea of just how buried the ship is with the hangar deck well above the waterline. . . #rvpetrel #marine #ocean #picoftheday #searesearch #researchvessel #rov #auv #shipwreck #offshore #marinetechnology #autonomousvehicle #autonomous #robot #underwaterrobot #marineoperations #robotics #teampetrel #shiplife #paulallen #vulcan #usshornet #usshornetcv8 #cv8 #wwii #wwiihistory

We’ve also included CBS This Morning’s coverage of R/V Petrel. You can see it in action below.