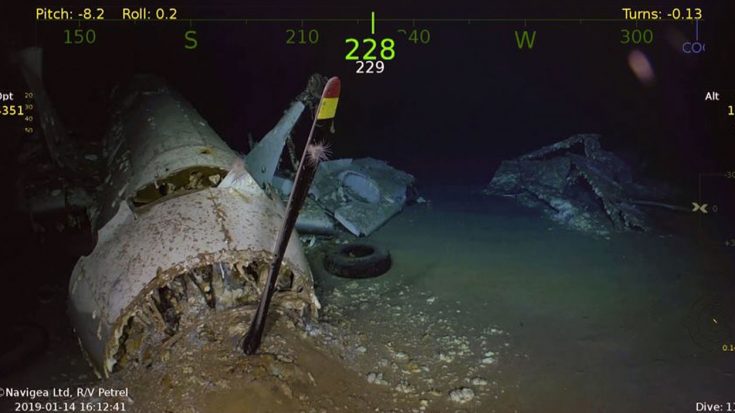 In early January 2019, R/V Petrel, a research vessel owned by the estate of Paul Allen (which is also responsible for finding various other historical wrecks), located USS Wasp 13,780 ft. below the surface of the Pacific.

It took them a few months to release their initial pictures and videos, which you can see here, but now they went a step further. They’ve expanded their search around the shipwreck and found some of the aircraft that floated separately to the bottom. You can see their initial video at the bottom of this article.

USS Wasp (CV-7) was an aircraft carrier in the United States Navy which served during World War II. Built between 1936 and 1940, the ship was first deployed to the Atlantic to help with the occupation of Iceland but was sent over to the Pacific Theater just a year later to replace ships lost in major battles.

On September 15, 1942, while on the way to Guadalcanal to aid the insertion of Marines, the ship’s lookout saw 6 torpedoes coming toward the ship. The crew tried to avoid them but there were just too many, three striking the front of the ship near fuel tanks and ammunition compartments. In less than an hour, multiple explosions caused fires to burn with unbearable intensity, the captain ordered to abandon ship.

193 sailors lost their lives in the attack, 336 were wounded and nearly 2,000 survivors were rescued by other ships. The ship was torpedoed as not to leave sensitive information onboard and sank later that night.

As a carrier, Wasp’s job was to insert warbirds into the air. As you can see in the historical picture below, at any given time this ship could have a mix of F4F Wildcats, SBD Dauntless or TBF Avengers onboard.

Some of these types of aircraft were found near the wreckage of the ship, although most of them were diverted to USS Hornet when the ship was struck. The ones that remained on deck, however, can now be seen in the clip below which was taken by R/V Petrel.