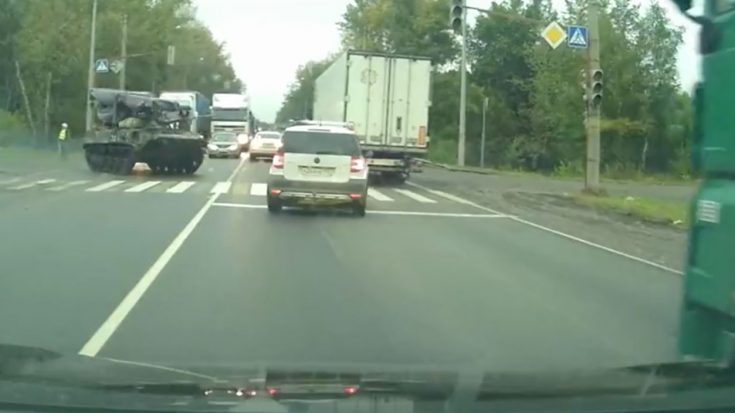 Russia is a really wonderful place…to see some of the craziest videos from the road. We’ve always wondered why in the world there are so many videos online from there and then we figured out why. Because accidents happen often and the police and insurance companies have their fair share of corruption, people put dash cams in their cars to prove that something happened.

Now, because many people have these things placed on their dashboards, you can imagine the types of footage they catch on them. From crazy crashes to random people fighting on the street, these things are a gold mine for entertainment. This one is no exception.

While pulling up to a light, a man notices a convoy of Russian tanks/armored vehicles being moved between locations. As the third one comes around the bend, you can already tell it’s going too fast and lo and behold, the tail spins out of control. It smashes into a car (no report on injuries) and correct us if we’re wrong, it seems to drive away as if nothing happened.

Now, if you were going to tell an insurance agent you were t-boned by a tank, would he believe you without this video?