Don Bullock Takes a B-17 Low And Fast 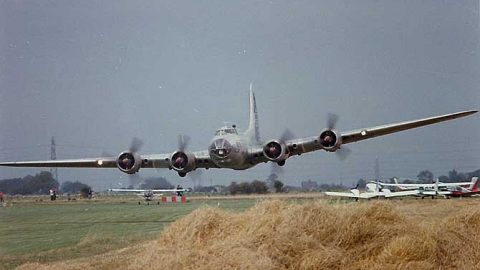 We’ve seen this picture a few times and even included it in a post of low flyby pictures back in the day, but we never knew where it was from. Although some of you might know as the pilot was a big deal back then, we just found out about this particular event and then dug into the pilot’s life.

It didn’t end so well.

This particular footage was taken at the 1979 Duxford airshow. The pilot was Don Bullock. He was flying the B-17 Sally B at this particular airshow and as you can see, was really good at it. He was known for pushing the envelope when flying but was really liked and respected by his peers. You’ll also see him flying an A-26 Invader in this clip. That’s the plane that killed him.

The very next year, Bullock was performing in the A-26 at Biggin Hill when he attempted a climbing roll. He didn’t exit out of it in time and crashed in front of all the spectators. To make matters worse, he had six passengers in the plane with him.

After this tragedy, the Civil Aviation Authority prohibited having passengers on board during airshows.