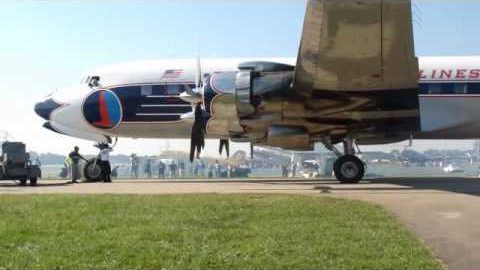 Historical Flight Foundation’s Douglas DC-7B started its engines up during the AirVenture 2010 in Oshkosh, Wisconsin.

The aircraft was coming off a six-year restoration effort and was accompanied by 13 crew members during its first multi-city tour.

This airliner was considered unique because it was the only US-based, four-engined passenger prop-liner in operation during that time. In addition, it was also the last surviving aircraft from the 112 DC-7B ever produced.

Oshkosh was the tour’s first leg, so the newly-restored DC-7B in Eastern Airlines colors was the show’s star attraction. Thousands of people finally saw (and heard!) the DC-7B in action. After all, who wouldn’t want to see those four Wright R-3350 radial engines working in unison?