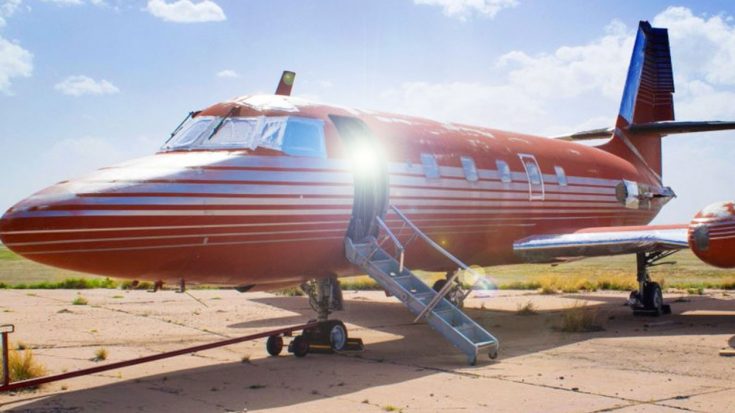 The King of Rock ‘n’ Roll’s private jet is up for sale and bids are coming in. The 1962 Jetstar is one of three aircraft privately owned by Elvis but there is a catch. You have to take it in the condition it’s in.

Lockheed first introduced the aircraft back in 1957 as a business jet. It seats up to 10 people in the fuselage not including a crew of two up front. Elvis Presley purchased his in 1962 for about 2 million USD but since his death in 1977, the plane has been rotting away in a boneyard in New Mexico.

Currently, the plane is in shambles. The exterior paint chipping away from the desert heat, the aircraft is also missing its engines and some cockpit instruments. Ironically, a private buyer bought it last year for $430,000 and is now trying to flip it.

Elvis Presley's abandoned private jet is up for auction.

But why is that?

If you look at any memorabilia from Elvis, it raises in value each year. We’ve heard of his watches selling for millions of dollars, so if you take that into consideration, restoring this plane or even giving tours of it in its current state might be highly lucrative.

The company Iron Planet is in charge of selling this beauty. It is a marketplace where you can buy and sell big items such as military equipment, excavators and other machinery, which is why it’s the perfect place to sell such a high valued item.

Got to this link here if you’re interested in placing a bid.

We also found a short clip of a tour of the aircraft. You can check it out below.