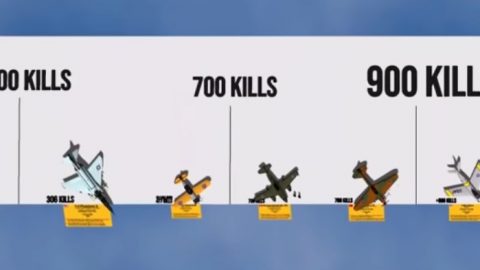 The Battle For Air Superiority

If you’re looking for a comprehensive list of fighter planes ranked by kills, then this is the perfect video for you.

The top 5 starts with the Spitfire by the British Royal Air Force. The Spitfire’s elliptical wing design and sunken rivets gave it exceptional speed during WWII. It has a total of 4,000 kills to date.

Next up is the Hellcat which supersedes it with 5,229 kills. This American fighter plane was mainly used in the Pacific War against the Japanese.

Crowd favorite P-51 places 3rd on the list with close to 6,000 kills. This plane gave the Americans the edge in air superiority during WWII.

Second place goes to the FW 190 with more than 10,000 kills. Germany used this warbird alongside the BF 109 for the Luftwaffe.

The plane with the most kills goes to the BF 109. Perhaps the most important part of the Luftwaffe, the BF 109 helped the German forces to have air supremacy for some time.