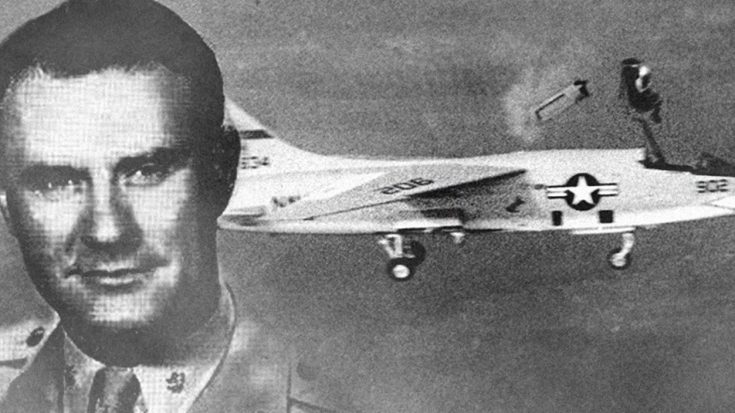 When pilots soar through the skies they typically don’t pay much mind to the clouds. Sure these clouds can restrict vision or cause issues at times but generally, they don’t endanger the pilots. However, there is one monumental story of a pilot ejecting into a cloud that nearly took his life.

In 1959 Lieutenant Colonel William Rankin was conducting a routine flight exercise in his F-8 Crusader. Weather conditions turned harsh and in a twist of fate Rankin’s F-8 suffered an engine malfunction. He was forced to eject at high altitude into the clouds but this was only the beginning of his problems.

Lieutenant Colonel Rankin ejected nine miles above the surface of the earth and his lack of a pressure suit began to take a toll on his body. Blood began to pour from his nose, eyes and his abdomen began to swell. As he his descent into a cumulonimbus cloud and lightning burst all around him. His parachute deployed but strong wents into the storm cloud thrust him up over and over again. He was beaten with hailstones and the rain was so heavy he nearly drowned.

“At one point, I got seasick and heaved.”

Eventually, Rankin found his way out of the cloud, fell to the earth and became tangled in some trees. His descent through the massive storm lasted 40 minutes. He was taken to the hospital and spent weeks in recovering from frostbite, decompression and injuries from the storm.