Filmed From A P-51, You Can Enjoy These Yaks Like Never Before 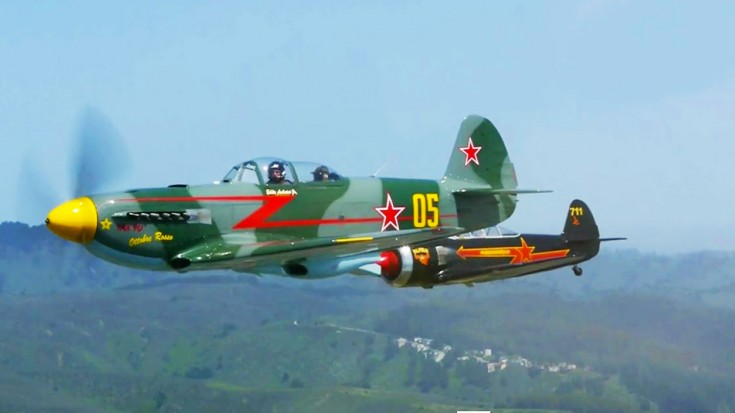 How Often Do You Get To See These Warbirds?

We just found another great air-to-air video which came to us from a great videographer Tim Evan from Vimeo. Filmed at the Pacific Coast Dream Machines airshow in Half Moon Bay, this footage was taken from the back seat of Eddie Andreinin’s P-51 Mustang by the name of Primo Branco. The reason we mention that is the fact that you can clearly hear the roaring Packard of this beauty.

In the camouflaged plane, the Yak-9, is actually Eddie’s son, Ed Jr. and right next to him is Kent Carlomogno’s Yak 11. These guys have done some performances together in the past and make a pretty neat aerial team.

The Yak-9 was the first Soviet plane to shot down the first operational jet in the world, namely, the Me 262.

As for their planes, the Yaks are not as popular in the U.S. as elsewhere, but they did do their job on the Russian front. Yak-9s were the most produced Soviet fighters of all time, with nearly 17,000 examples manufactured in six years between 1942 and 1948.

The Yak-11s were trainers which were introduced after World War II and were used until 1962. As the previous versions enjoyed much success in air to air combat, Yakovlev was tasked with making a cheaper version of the fighter in order to train the next generation of fighter pilots.

A quick trip around the block from TimnEvan on Vimeo.