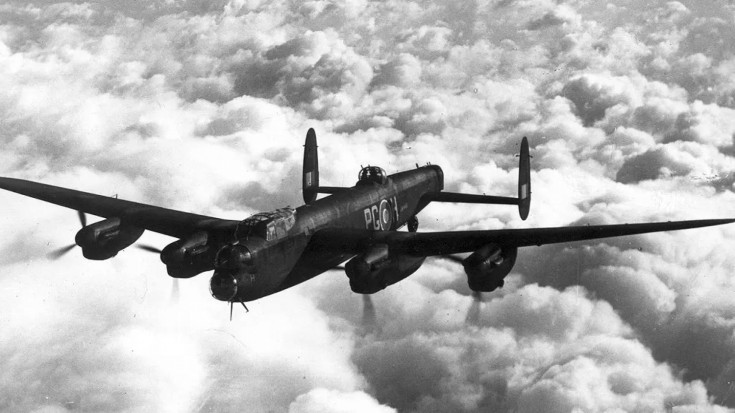 On July 18th, 1946 Squadron 35 of the Royal Air Force set out on a new mission, called “Operation Goodwill.” Pilots from from the RAF set out in 16 Lancaster Bombers to begin a tour of United States army bases where they were decorated as heroes for their efforts during WWII. Squadron 35 can be seen greeting Air Force General George Stratemeyer before embarking on the remainder of their national tour.

“The finest bomber of the war! Its efficiency was almost incredible, both in performance and in the way it could be saddled with ever-increasing loads without breaking the camel’s back. The Lancaster far surpassed all the other types of heavy bombers. Not only could it take heavier bomb loads, not only was it easier to handle, and not only were there fewer accidents than with other types, the casualty rate was also consistently below those of other types.”

The Lancaster hauled the largest payload of any bomber during WWII and was capable of taking flight with over 33,000 pounds of cargo. The Lancaster was the only aircraft able to carry the 22,000 pound Grand Slam bomb capable of penetrating deep into the ground before detonating and destroying a wide range of target area. After WWII Lancasters found use in humanitarian efforts such as “Operation Manna” hauling rations food supplies to starving victims of war and as transportation vessels to bring home over 74,000 prisoners of war.