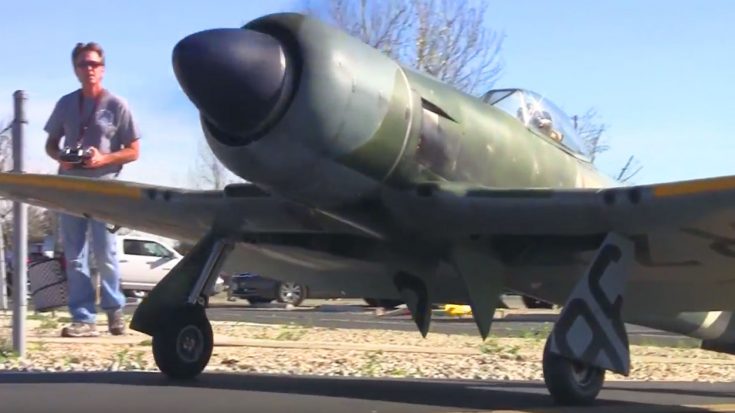 What Goes Up, Must Come Down.

RC planes are things of beauty, the thrill of flight in the palm of your hand on a sunny day. The experience is even better when your RC plane is even bigger in size, such as this giant model Tempest.

The Hawker Tempest may not get as much attention as other RAF fighters but it was a solid plane. Upon its introduction in 1944, the Tempest could attack enemy aircraft in low-altitude such as the Me-262 and V-1 flying bombs. The design of the Tempest’s wing hindered performance in high altitudes and fast speeds so it to regulated to its interceptor role rather than serving as a fighter for most combat missions.

“The Tempest arose from Hawker’s desire to apply a new, thin wing to the Typhoon in order to enhance performance. The Tempest V combined the new semi-elliptical wing with the Typhoon airframe and Sabre II engine. The Tempest V was a low and medium altitude short-range fighter, capable of carrying specially designed 45-gallon drop tanks, and armed with 4 x 20 m.m. cannon in the wings.”

On a nice clear day in China, California this RC pilot took his oversized Tempest out for what he expected to be an enjoyable day of flying. But things didn’t go exactly as he foresaw, and you can see what happens to his RC Tempest when the engine cuts out in this video.