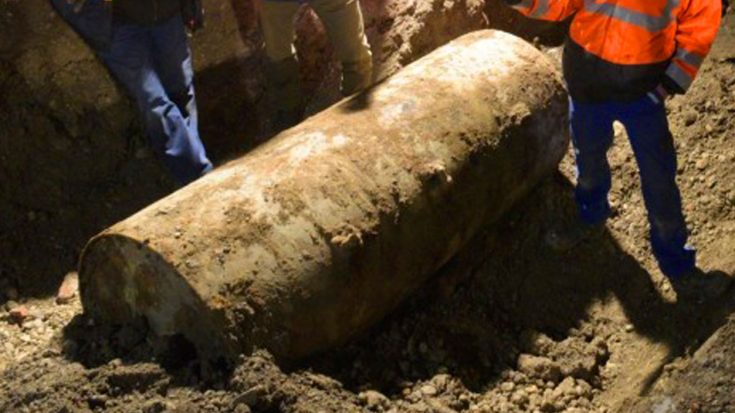 A massive WWII-Bomb is not exactly the present that residents of Augsburg, Germany wanted on Christmas morning. An undetonated British aerial bomb was discovered by a construction crew on Christmas day, prompting an evacuation order for the city’s 50,000 residents.

The 2-ton Blockbuster was one of the biggest bombs used by the Royal Air Force during WWII. Often dropped from British Lancaster Bombers these bombers were powerful enough to level buildings. Safety regulations were imposed on bombers that blockbusters must be dropped at an altitude of over 6,000 ft or else risk getting caught in the bomb’s shockwave.

“It was a British bomb that was found in the city of Augsburg and led to the biggest mobilization in Germany — around 900 police officers — since the war itself.”

The city of Augsburg was not going to take any chances with and called in a bomb squad to defuse it. After over seven decades trapped in the mud the 2-ton bomb’s case had worn very thin, increasing the risk of detonation. Over 50,000 residents were evacuated from some 30,000 households from their homes on Christmas morning.

After several grueling hours, the bomb squad announced that they had safely defused the blockbuster shortly before 7:00 PM and residents can return to their homes. Sadly this scenario is fairly routine across Germany with many undetonated WWII-era bombs still yet to be found across the country. Ruptly News provides footage of Augsburg’s evacuation and bomb squad.