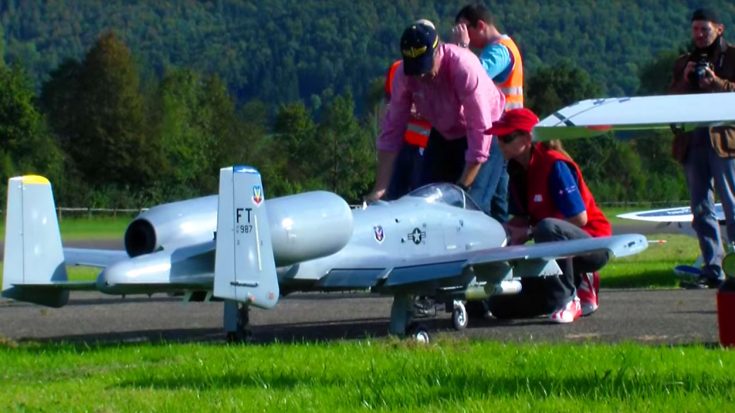 The A-10 Warthog, a ground soldier’s best friend. Flying at over 400 mph with 30 mm Gatling Gun that fires 3,900 rounds per minute shoot so fast that they break the sound barrier. It’s safe to say that you don’t want to be on the business end of an A-10 Warthog.

Although the Warthog was created in the 1970s it didn’t see a lot of action until the Gulf War. During Operation Desert Storm this vicious jet tore through more than 800 Iraqi tanks and military vehicles. Recently there was an attempt to retire the A-10 from service in favor of the F-35, but testing showed that the Warthog was far too reliable and will remain in service indefinitely.

The next best thing to flying in an A-10 is having your own oversized RC model of the fierce jet. The turbine engine can be heard from a mile away when it speeds by. As an added bonus this one can even make the Gatling gun sound that’s almost identical to the real BRRRRTTTTTT of a true Warthog. This R/C Turbine Modell Scale Jet Warthog A-10 is a treat to watch, check out this amazing video from RCHeliJet capturing it all in action.