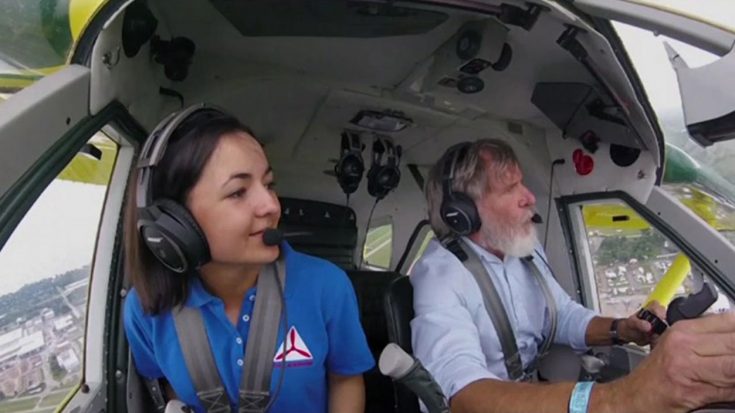 There have many highlights from this year’s AirVenture Airshow but this one may be the biggest. Harrison Ford came to the annual airshow in Oshkosh, Wisconsin and took a personal ride with 16-year-old Jodie Gawthrop to celebrate the two millionth flight Young Eagles Program. The Experimental Aircraft Association’s Young Eagles Program began in 1992 as a way to introduce and inspire children to the world of aviation. Ford served as the chairman of Young Eagles from 2004 through 2009 and returned to celebrate this monumental flight.

“Really amazing to meet someone like Harrison or meet a whole community of people here at the air show that share that passion for aviation. You can tell he’s really enthusiastic, really passionate, and it was just amazing to see the air show from that perspective.”

Jodie took to the skies in Ford’s DeHavilland Beaver for a 15-minute flight while learning the about of the basics of the plane and talking about his experience as a pilot. When she asked about if celebrities use checklists when they fly to which Ford happily replied, “Of course, they need them.” It is just so inspirational to see one of the biggest movie stars on earth sharing his love of flight with the next generation of aviators. Jodie is just overwhelmed with joy in the video since it is not every day that you get to be Han Solo’s copilot.