He Has A Huge RC P-38 Lightning, What He Does With Next Is Amazing… 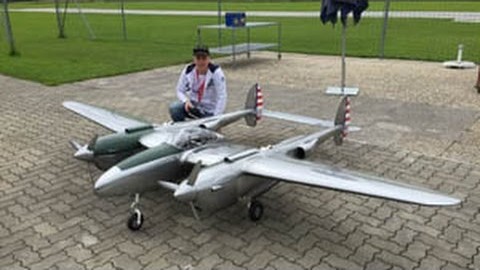 Clear The Way For The Fork-tailed Devil

We’re not sure which is more perfect: the beautiful flying or the perfect landing? This RC model is simply one for the books. Modeled after the legendary Lockheed P-38 Lightning, this one clearly dominated the skies that afternoon. Isn’t it the most gorgeous plane ever? Okay, maybe not but unlike other war birds famous for their roaring engines, the P-38 is unusually quiet especially for a fighter. Why? It’s because the exhaust becomes muffled by the turbo-superchargers.

The P-38 was used in a number of roles, including interception, dive bombing, level bombing, ground-attack, night fighting, photo reconnaissance, radar and visual pathfinding for bombers, and evacuation missions, and extensively as a long-range escort fighter when equipped with drop tanks under its wings.

It may not have excelled as a dogfighter but its distinctive twin booms have become historical. It was often called “two planes, one pilot” by the Japanese.