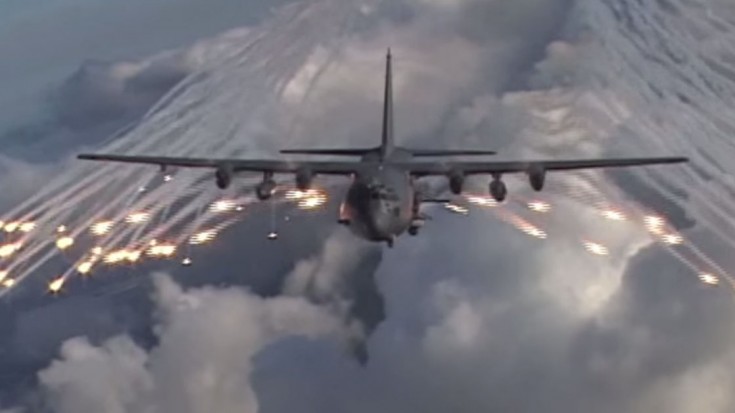 That’s The Most Beautiful Display Ever Created And It’s Incredibly Functional.

The AC-130 is the most successful gunship ever created and is feared by any enemy within its kill-zone. The AC-130 is actually a weaponized version of the C-130 Hercules which was produced by Lockheed as a transport plane. Built in 1954, this turboprop aircraft is still in service today, with over 2,500 of them produced since their inception. With over 14 variants of the C-130, there are also 6 variants of the gunship version alone.

Flares, or decoy flares, are a countermeasure device used by many aircraft to confuse heat-seeking missiles and avoid getting shot down.

Both the A-130s and AC-130s have seen many conflicts. From the Vietnam War to the War on Terror, they have been used extensively in combat zones. For this reason, they are a highly valued target. In order to avoid being shot down, these massive aircraft are equipped with flares which shoot out far from the aircraft to confuse incoming missiles. Since there are so many of them that are released at the same time, they create a very thick cloud of smoke.

In good conditions without much wind, the smoke trail looking at the nose of the plane looks like an angel. Coupled with its firepower, that’s where the ‘Angel of Death’ term comes from. Take a look for yourself.