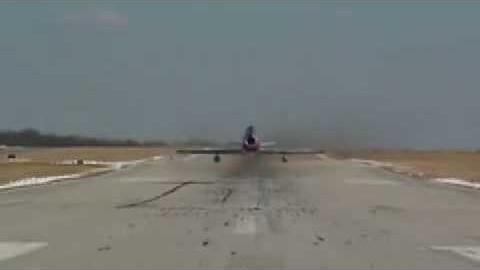 Can We Just Say How Epic This Is?!

This is going to give you some serious pilot envy. Come on, you know it takes more than an exceptionally built aircraft to do that very low takeoff. That needs great skills and a whole lot of grit man!

The North American F-86 Sabre claimed 757 victories and only 103 losses during the Korean War. It showed incredible aerial warfare superiority after going toe-to-toe with the famed Mikoyan-Gurevich MiG-15 especially during high speed dogfights.

Considered one of the best and most important fighter aircraft in that war, the F-86 is also rated highly in comparison with fighters of other eras.[3] Although it was developed in the late 1940s and was outdated by the end of the ’50s, the Sabre proved versatile and adaptable, and continued as a front-line fighter in numerous air forces until the last active operational examples were retired by the Bolivian Air Force in 1994.

After watching this clip, we realized we should also give credit to whoever had the courage to film the takeoff. That was incredibly close!