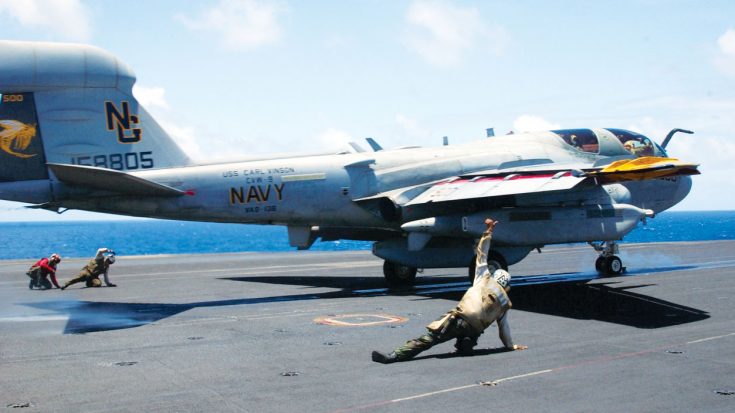 Hey, He Owned That Brief Flight.

The full video below will show you that working on the deck of a carrier is the second most dangerous jobs in the world. It is said that the number one spot is taken by fishermen in the Bering Sea, but either way, both these jobs have many things in common.

For one they both involve working in high seas. With the ships pitching and rolling, it’s incredible that anyone gets anything done. Secondly, the square footage. Fishing boats have tiny decks (in comparison) which is why when you combine high seas things get dangerous as they fly around the deck.

On a carrier, the deck is about a 3 football fields long but you have hundreds of people working on them, and, well, aircraft land and take off from it. That’s a recipe for disaster. This is why people equate working on a deck to “orchestrated chaos.”

As for this video, it shows one of the many, many dangers of working on a carrier. Here, a catapult crew is getting ready to launch an EA-6B off of CV-63 Kittyhawk. The guy on the right doesn’t duck and get out of the way in time and the jet blast took him some yards back, flipping him as he flew across.

The best part of all of this however, is the fact that he didn’t get hurt. The second best part…he “dismounted” like an Olympian. We give that recovery a 9 out of 10.