Jets Attached To Bomber’s Wings For A Reason 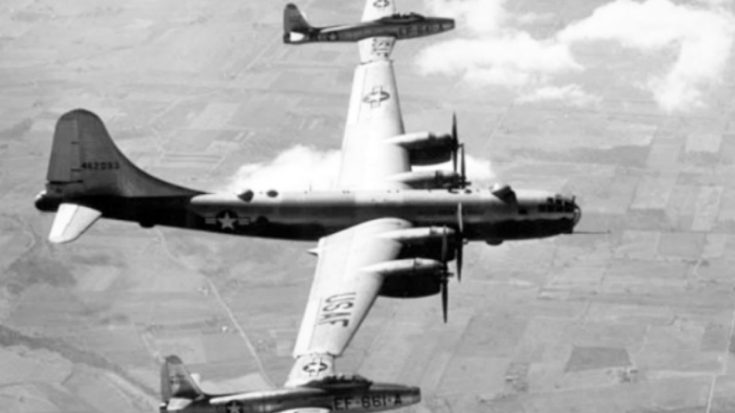 Aviation, in general, got a tremendous boost during World War II and in the subsequent years. Starting out with bi-planes just a few years before the war, the six-year conflict had jets coming out on the other end.

During the 50s, there were many “crazy” ideas thrown around trying to utilize what was learned during the war. From breaking the speed of sound to saving on fuel before entering battle, the Air Force and NASA tested some pretty wild ideas to reach their goal.

The FICON Project was one of them.

FICON, or “FIghter CONveyor,” was a test to see if bombers could ferry fighter planes such as the RF-84K Thunderflash under its bomb bay so it could save on fuel. That way, the fighters could be dropped off at their destination and have longer linger time thus, be more effective.

Skip to 4:41 if you want to see moment the two planes attach mid-air.

Alternatively, Project Tom-Tom was designed to test whether it was feasible to attach two fighters to the wingtips of a bomber. The platforms tested were the B-36 Peacemaker and B-29 Superfortress. This video will show you the modification process in the beginning and the actual mid-air coupling toward the end.

Talk about skill though. If you think mid-air refueling is hard, check this out. The fighter pilot had to match the speed of the bomber, actually, touch the extended mechanism and speed up to lock itself in place. Then, you just shut off your engine and dangle there until you’re within range of your mission at which point you had to detach yourself.

As a bonus fact, let us tell you why this project was scrapped although we’re sure you can figure it out on your own. Although several successful hookups were performed, a Thunderflash piloted by Beryl Erickson has torn away due to turbulence and wingtip vortices. He landed safely, but the Air Force saw the dangers of the strategy and focused on mid-air refueling instead.