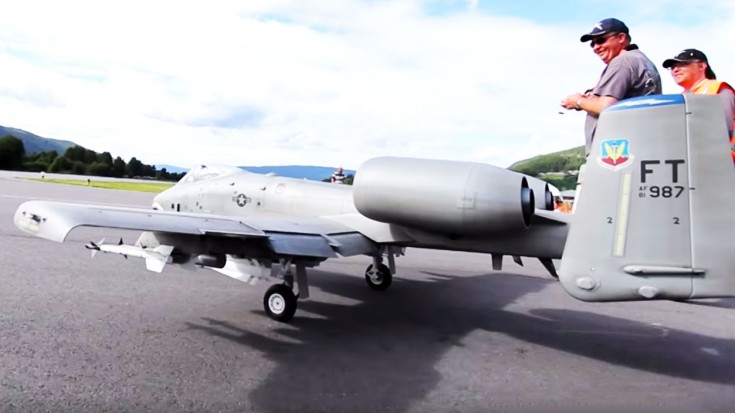 For some there is no better job than being a pilot, whether professionally or recreationally. The next best thing is probably Rc flying and although less expensive, it can still get extremely pricey. In this clip, you’ll see a man who has devoted much time and money to making one of the greatest planes of all time according to many. The A-10 Warthog. Giant in size, this thing takes off like a scale jet and it’s spectacular.

The A-10 Thunderbolt II, is a descendant of the legendary Republic P-47 Thunderbolt, the World War II plane that could pack a massive punch.

Like its predecessor, the Warthog or Hog as it was nicknamed, is used mostly as a close air support aircraft. Powered by twin-jet engines, it can travel up to 518 mph with an overall distance of of 2,580 miles. Its biggest asset besides the variety of rockets it can carry, is its nose mounted GAU-8/A Avenger Gatling cannon which contains 1,350 rounds. Able to shoot 4,200 rounds a minute, any enemy within its range is met with 70 rounds every second. It literally pulverizes anything in its sights.