When Driving On The Highway, This Is The Last Thing You’d Expect To Pass You 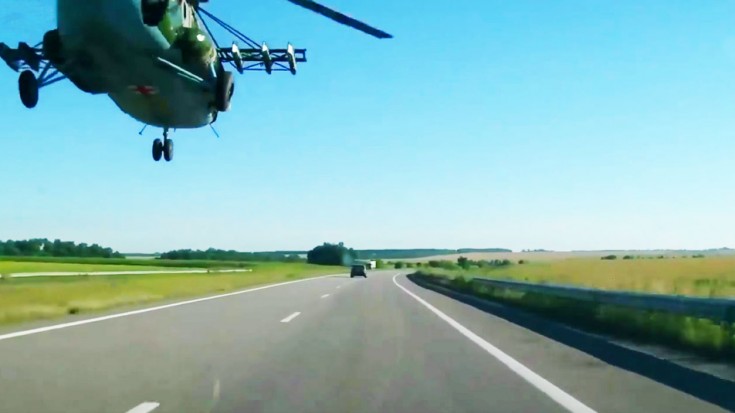 Luckily, This Guy Had A Dash Cam To Capture This!

In 2015, a motorist was driving down a highway minding his own business when all of the sudden, he was passed by…a helicopter. Luckily, the driver had a dash cam equipped and caught the entire four minute ride. Otherwise, I’m assuming not many people would have believed him. As if a helicopter passing you wasn’t enough, the pilot for one reason or another flew in front of the car, just feet off the ground, and led the way for a couple of miles. Usually things that fly were not restricted to paved roads, so this is really a brain teaser.

From the looks of it, the helicopter is an Mi-8. This Russian designed and built transport helicopter has been in service since 1961.

Judging by the markings, this is a Ukrainian Mi-8 helicopter which is most likely used for search and rescue.  Ukraine’s military has about 30 of these helicopters and use them mostly for transport. There are also weaponized Mi-8s produced by Russia and used as gunships. With over 17,000 of them produced, the Mi-8 is among the most produced helicopters in the world. In this video, you can see one up close and personal.