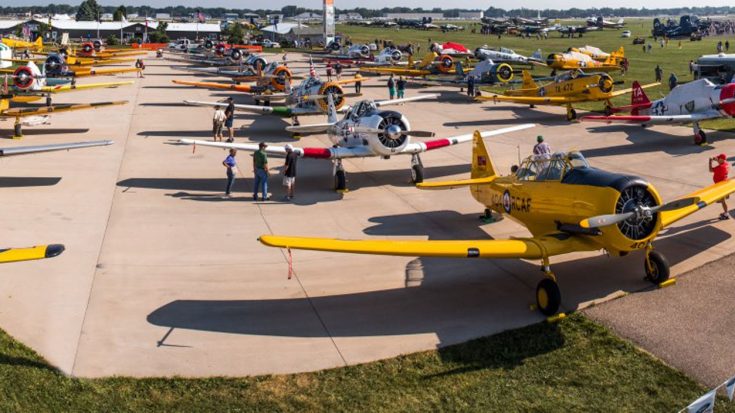 As part of our daily update, here’s what happened at the Oshkosh airshow on Tuesday, July 24th, 2018. We compiled some great pictures and videos from both their official Facebook page as well as some of the attendees.

As a refresher, EAA Oshkosh AirVenture is the biggest airshow in the United States. Hosting over 10,000 aircraft and attracting hundreds of thousands of spectators, this airshow has something for every aviation buff. From vintage warbirds to state of the art jets, if you love all things that fly, this is the place to be.

“Here’s what the Warbirds ramp looks like when you’re about to celebrate the North American Trainer Association 80th anniversary in the air show. Photo courtesy of Cockpit360.”-EAA-The Spirit of Aviation

C-17 made an appearance too!

Now THAT’S a takeoff. Mike Patey with Flying Cowboys and his Wilga Draco.

We're happy to have the ultra-rare British Gloster Meteor at #OSH18 this summer! Take a look around this WWII-era jet.

Here’s a very rare look at a Gloster Meteor.

Stay tuned every day for new updates. We’re following the airshow closely to show you the best pictures and videos of the day. Enjoy!