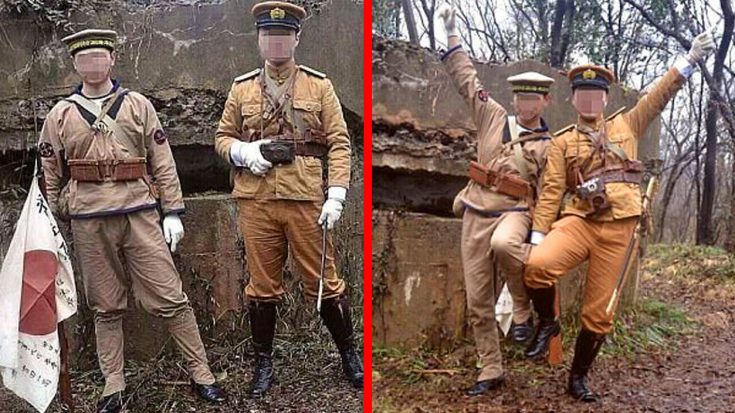 There were many horrible atrocities committed during WWII, but among the most sickening is the Rape of Nanking. As Imperial Japan ravaged across East Asia the city of Nanking was hit the hardest in a series of war crimes that have gone down in history for their cruelty. However, it seems that there are some people who can’t help but laugh at the slaughter and rape of 300,000 innocent people as two men appeared to mock the Nanking Memorial.

Recently pictures of a pair of men dressed as soldiers from Imperial Japanese Military appeared in Nanking to laugh at the massacre. The images have caused many Chinese citizens to be offended and angered at the sheer insensitivity of men. These actions have gained the attention of the Nanking Massacre Memorial staff who had harsh words for their actions.

“We express strong condemnation and indignation towards those who take pictures for fun while wearing the uniforms of Japanese soldiers who invaded China.”

The Japanese assault on Nanking lasted six weeks as an estimated 300,000 Chinese citizens were killed, some 80,000 women were raped and forced into sex slavery known as “comfort women.” The Japanese Government is still on shaky grounds with China over the Rape of Nanking and has never formally apologized nor does it bring up the massacre in their history. There was a similar incident a few months ago as two men thought it would be a good idea to dress as Japanese soldiers in a busy railway station.

This video clip shows the Nanking Massacre Memorial on the 80th anniversary of the event as China’s President Xi Jinping makes an appearance.