Museum Dug Out A Crashed Me 262, Then The Military Showed Up 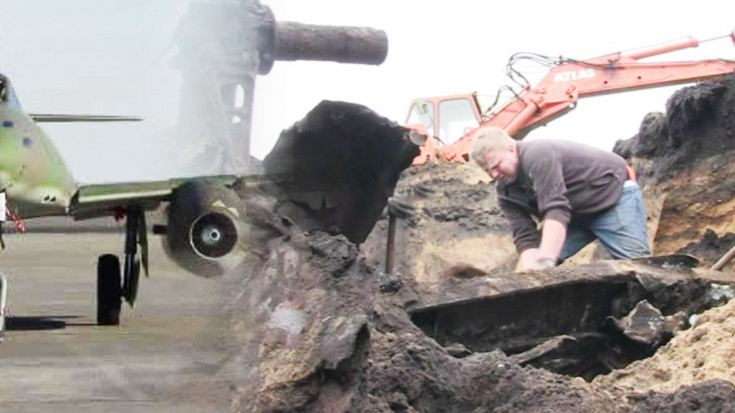 A Least In The End It All Worked Out.

This great video shows members of the Museum Deelen Airbase in the Netherlands digging out one of the most exciting planes of World War II.

On September 12th, 1944, Uffz. Schauder of the Luftwaffe crashed near a village in Elden in his Me 262 which was the first time this jet went down in Netherlands. The Germans quickly located a bomb crater in a nearby town and dumped the plane there. Since they were introduced in April of the same year, there was still some secrecy of their existence and they didn’t want to give away the technology used.

When the wreck was accidentally found more than 70 years later, the aviation museum of course jumped into action. Getting an excavator and as many hands with shovels as they could, they carefully dug out whatever pieces they could get their hands on.

The unfortunate time when the parts were taken away.^

Bringing it everything back to their museum, they started cleaning their findings to see what they came up with. Within months, the Air Force showed up in lieu of the National Military Museum and seized everything the museum found. The reason? No permit to excavate at the premises.

Although this heartbreak for that local museum was bad, it was temporary. Upon multiple discussions with the Air Force and the National Museum, they came to the conclusion that the aviation museum was in fact the best place for the Me 262.

Phew! All that work and it could have been all taken away.