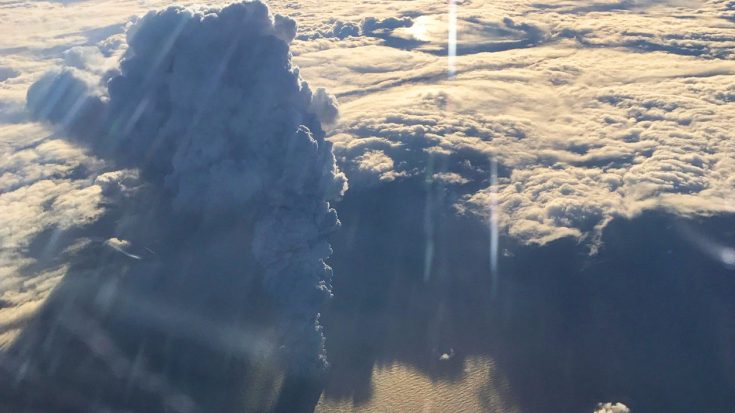 A volcano near Alaska’s Aleutian islands recently erupted, blasting a cloud of ash 20,000 feet into the air. The volcano had a small eruption a few days ago that caused the Federal Aviation Administration to reroute flights, but on December 29th the eruption intensified. As a results the FAA has issued their highest alert for flights in the Pacific.

“An ash-producing eruption started at 23:45 Dec 29 AKST (08:45 Dec 30 UTC) and is continuing as recorded by seismic data on nearby islands and as seen in recent satellite images. Cloud-top temperatures from satellite suggest a cloud height of around 20,000 ft asl. Regional winds are from the southwest. We are raising the Aviation Color Code to RED and the Alert Level to WARNING.”

Alaska’s Bogoslof (BOH-goh-slawf) volcano has laid dormant since its last eruption in 1992 which lasted 18 days. The lava from the eruption and has already drastically changed the geography of the island and there are no signs of the tower of ash letting up. The closest populated area is 61 miles away but seems are currently pushing the ash away from the areas. The FAA has ordered all Pacific flights to be rerouted around the plume of ash until the eruption subsides.