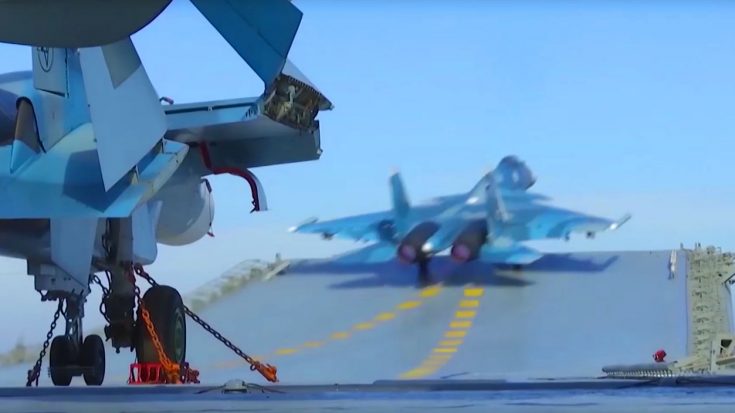 After a month of travel, Russia’s war fleet led by their flagship the Admiral Kuznetsov has arrived in Syrian waters. Their travels have been wrought with international tensions over refueling in Madrid, a fighter jet crash but now the fleet is ready for their main objective, attacking ISIS forces.

Russian MiG-29 and Su-35 fighters have attacked ISIS munition depots in Idlib and Homs. The Admiral Kuznetsov is Russia’s only aircraft carrier and this marks the first time it has participated in combat operations. It also appears that Russia has also resumed their controversial attacks on ISIS forces within the city of Aleppo.

“We launched a major operation to strike the positions of the Islamic State and Jabhat al-Nusra in the provinces of Idlib and Homs. It’s a well-developed, industrial-scale production.”

Defense Minister Shoigu did not mention attacks on Aleppo but locals are reporting that the city has been bombed. Reports also claim that the warships have launched missile strikes into Aleppo as well as other Syrian provinces and the bombings appear to be much more intense than previous attacks. The Russian Defense Ministry has released this footage of their war fleet and fighter jets preparing for their assault.