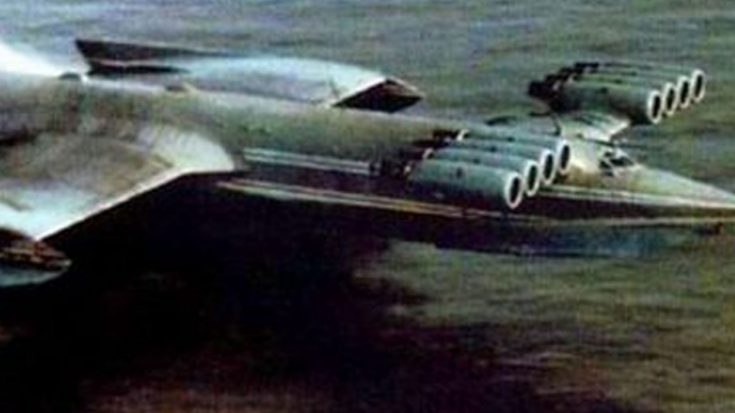 The Cold War led to many innovations in the world of science. While Generals plotted military strategies, engineers from the United States and Russia worked continuously to gain a technical advantage over their rivals. However, it was always advantageous to keep a close eye on what your enemies are developing, such is such is the story of Russia’s Caspian Sea Monster.

In 1967 an American satellite spotted an unusual plane flying over the surface of a Russian lake at an incredible speed. The satellite saw the letters “KM” an acronym for Korabl Maket which translates into “experimental aircraft.” The CIA dubbed it The Caspian Sea Monster due to the body of water it was discovered in. At the time it was the biggest aircraft ever created and reaching speeds of over 300 mph.

The Caspian Sea Monster was an experimental ground effect vehicle or ekranoplan which could function as both a plane and as a both. It could cruise through the water at high speeds and was also fast enough to achieve flight above the surface of the water. At such a fast speed and low altitude, it was much more fuel efficient than other cargo planes, evade radar detection and surface mines.

“The original “KM” ekranoplan – designed to travel at high speeds just 150m above the ocean on a cushion of air – was created in the mid-1960s and is arguably one of the oddest weapons to emerge during the Cold War. The “Lun-class” follow-on was outfitted with six missile tubes and entered service with the Soviet navy in the late 1980s.”

The experimental ekranoplan went through 15 years of testing before crashing in 1980, the program was discontinued after the accident. Rare footage of the KM can be seen in the following clip from the Discovery Channel.