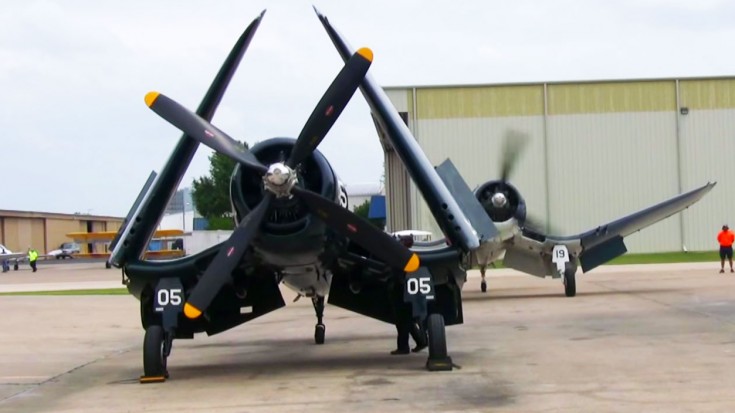 Seeing A Corsair Will Improve Your Mood, But 2? A Great Day Indeed!

The Chance Vought F4U Corsair is an American fighter plane which served in both World War II and the Korean War. With over 12,000 models built with countless variants, their design was so successful that they could not meet production demand. At that point, Goodyear and Brewster companies stepped up to the plate and help with production. Brewster built Corsairs were designated F3A, while Goodyears were designated FG. One of the Corsairs in the video owned by the Covanaugh Flight Museum is a Goodyear built model, the FG-1D, serial number 92339.

The Cavanaugh Flight Museum also has some of our other favorite warbirds:

It was the Cavanaugh Flight Museum that brought these two Corsairs together. Located in Addison, Texas, the museum has a non-profit status for aviation education. They provide rich information about American aviation heritage as well as aircraft restoration. One of their most notable achievements in terms of World War II aviation is the founder’s, Jim Cavanaugh’s, donation of $1.2M U.S.D. to re-engine Fifi, a B-29 Superfortress.