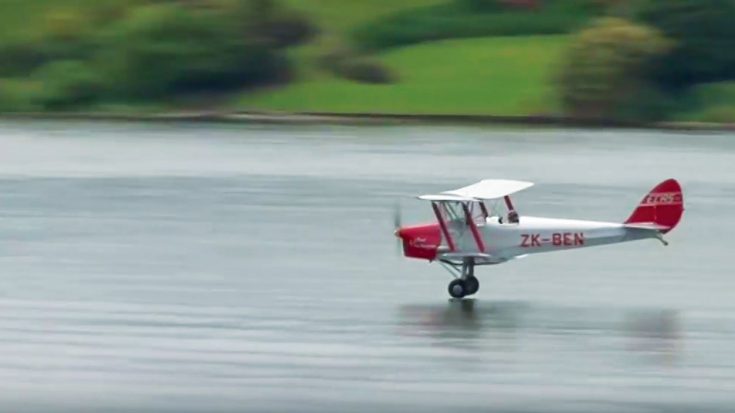 This awesome show happened back in 2013 Cambridge, New Zealand. During an event called the Armistice Over Cambridge, a pilot by the name of Dave Phillips performed a stunt that to this day boggles us.

Flying really fast, he dipped down over Lake Karapiro and did something we’ve never seen before. He touched the water surface with the two front wheels of his plane and literally treated it like water skis. That’s right, he water skied a plane.

The de Havilland Tiger Moth was first introduced in 1932 to the Royal Air Force as a trainer and over 500 of them were ever produced.

We’ve read through the comments on Youtube where we found this and we noticed that many people were calling this “stupid,” “dangerous,” “irresponsible” among other none-flattering adjectives. Here’s the thing folks, this isn’t some Joe Shmo doing this for the first time to impress a bunch of girls.

According to the Historical Aviation Film Unit which took this footage, this guy’s an expert. Dave Phillips, the man behind the stick of this Tiger Moth, has been flying since the early 70s. Flying for the RNZAF for many years, he now flies an Airbus A330 commercially. He’s always been fond of warbirds and vintage aircraft in general, and as you’ll be able to see in this video, he can fly them pretty well.