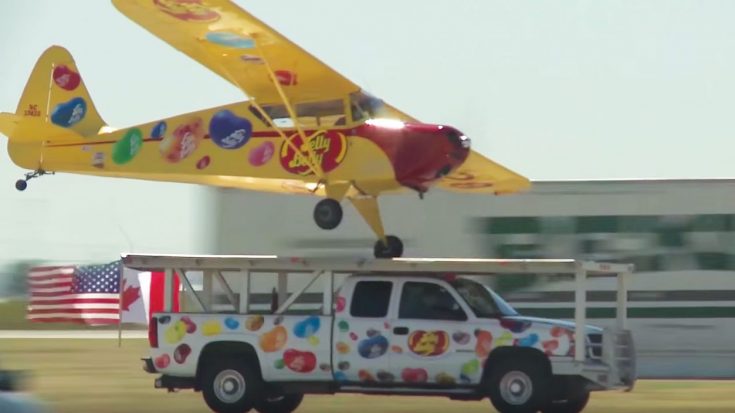 Talk About Nerves Of Steel.

For those of you scratching your heads looking at this plane painted with Jelly Beans, we’ll fill you in. This is actually a World War II plane that was introduced in 1940. That’s how we’re justifying posting it here before you guys start asking why this is on our page. Also it shows off the skills of one talented pilot and we all can appreciate that. His name is Kent Pietsch.

From the look of it this performance might have been a pre-show to a Thunderbirds demonstration. When you watch the video, notice the F-16s parked as the truck is going down the runway. Although the Thunderbirds are fantastic, so is this even though it’s performed at much slower speeds.

“The gratification is in knowing that people are enjoying themselves.”-Kent Pietsch

We’ve looked at Kent’s website and found some interesting facts about him. For one, he’s in his mid 50s and has been doing this for decades. He fell in love with flying at the age of 4 and has done everything since then to get up in the air. According to his site, he worked odd jobs by his local airport in order to get as close to planes as possible.

It paid off as you can see, as he’s quite a gifted pilot. He has performed over 400 shows around the United States in his Interstate Cadet and has been seen by millions of people over the years.