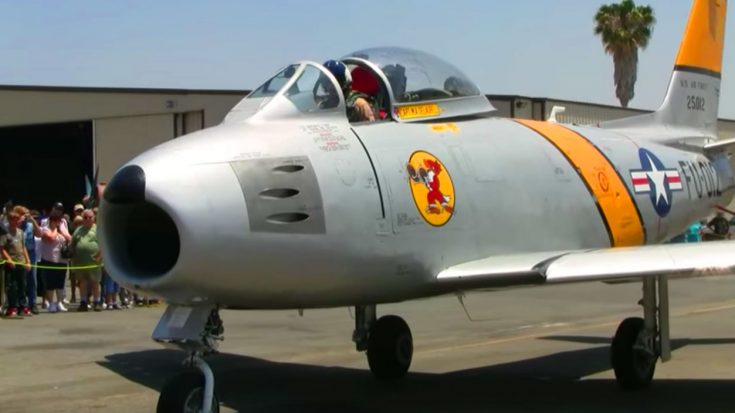 The F-86 Sabre has been called the most important jet of the 1950s, a bold claim but it does have a rich history. After World War II the world was entering the Jet-Age and with new technological advancements came new conflicts. By the early 1950s, the United States was entering the Korean War and struggling to keep up with Soviet MiG-15 fighter jets. To counter the growing threat of Soviet jets the United States created a fighter jet of their own, the F-86 Sabre.

Designed by North American Aviation, the F-86 Sabre was developed from flight research seized from German scientists at the end of WWII. F-86 pilots achieved success against MiG-15 fighters, shooting down 10 MiG-15s per F-86 lost.

“Forerunner of the operational Sabre was the XF-86, first flown Oct. 1, 1947, by North American Aviation test pilot George Welch. A few months later, Welch became the first pilot to fly the plane at Mach 1 in routine flight. Although technically rated as subsonic, the Sabre was no stranger to supersonic speeds.”

The Planes of Fame Museum has an F-86 Sabre in amazing condition and the crowds line up to see it in full glory. Check out the F-86 in this clip to see just what it can do.