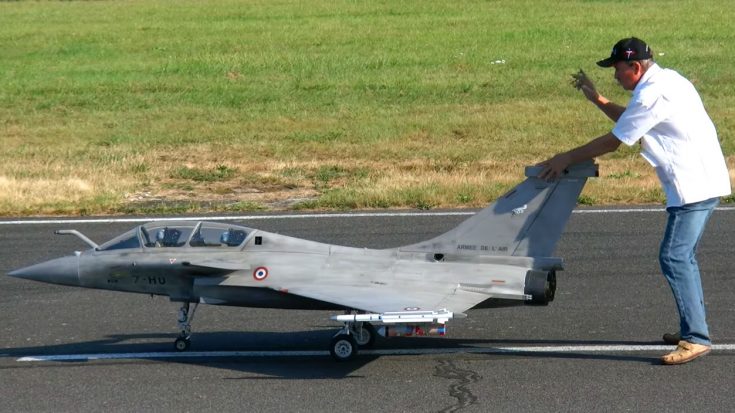 The Dassault Rafale multirole fighter is a thing of beauty and quite the rarity. Used primarily in Europe we don’t often get to see them in the United States but that doesn’t make them any less formidable. The Rafale also functions great as an oversized RC model plane when one performed at the 2016 JetPower Fair.

“[At JetPower Fair] everything will be offered, which has to do with the turbine driven model airplane: jet, helicopter and turboprop models, turbines, landing gear, RC-art and all imaginable accessories, also E-Impeller models and the associated drives, presented by around 120 exhibitors from around the world.”

Now the Rafale fighter can be celebrated as an oversized RC model and it moves pretty damn fast. The 1:5 scale model Dassault Rafale takes off into the sky without the least bit of effort. Up in the air, turning fast and firing sparks from the turbine engine as it bolts through the air. Seeing it leave colorful trails from its engines is wonderful and exciting, you need to see it for yourself in this amazing video.