P-47 and Spitfire RC Collide and Crash Into The Crowd 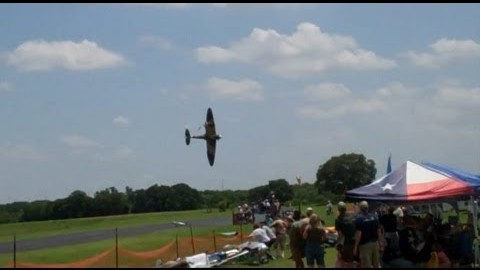 During a show at the North Dallas RC Club, there were five planes flying around and two of them (the P-47 and Spitfire) unfortunately met in a midair collision towards the end of the runway. The P-47 was travelling at a much faster speed as the Spitfire tried to do a slow pass. As the P-47 hit the Spitfire from behind, they both spiraled out of control and crashed into the crowded tent area. Talk about a real scare! No one saw that coming and you can sense the fear from the audience. Luckily for everyone, no one was hurt. Although for a moment there, we could see some fragments from the planes seemingly hit some of the bystanders. That would have caused serious injuries.

Let this be a lesson to everyone handling RC planes and also those hosting these shows. There shouldn’t be that many planes flying in the air all at the same time. Additional safety precautions should be taken into consideration.