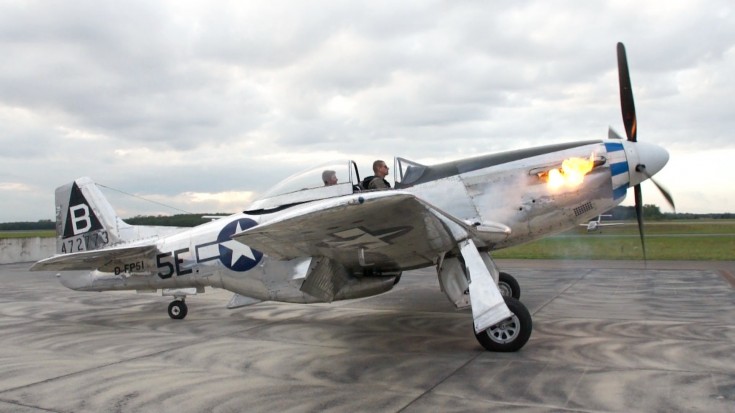 The P-51 Mustangs were one of America’s best fighter planes during World War II. A long range, single-seat fighter and fighter bomber, the Mustang was used during World War II and the Korean War as well. Fitted with an Allison V-1710 engine, it was later redesigned with an even more powerful Packard V-1650-7 engine, a license built Rolls-Royce Merlin 60 series. With its two-stage two-speed supercharger, the Mustangs were able to perform exceptionally well in both low and high altitude situations, making it one of the most iconic fighters of World War II.

Ernest Bankey is famous for this radio call, “This is Sunkist Two. I’ve got 50 Jerries cornered over Bonn. Will share same with any P-51s in the vicinity. See me at smokestack level. Over and out.”

Lucky Lady VII featured in this video is a P-51D which was built in 1945 and eventually ended up being designated as surplus. Changing many owners over the years, she ended up sold to Christop Nothinger of Switzerland. He painted her in the scheme of Lucky Lady VII, as a tribute to the great pilot, Ernest Bankey. Bankey was a World War II ace who had the rare distinction of becoming an ‘ace in a day.’ This title was attributed to him on November 26th, 1944, when he was awarded 5.5 kills during that day, a feat not easily obtained. He named his P-51 Mustang Lucky Lady in honor of his wife, Lilian Ruth Kontak.