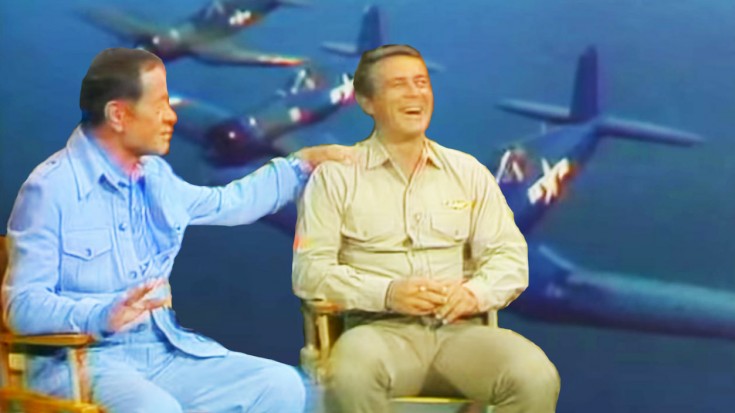 As You’d Expect, A Truthful, No BS Interview With The Most Famous Corsair Ace!

This interview of Gregory ‘Pappy’ Boyington and Robert Conrad is definitely worth a watch. Described by the host as ‘the most famous and most colorful pilot to come out of World War II,’ they discuss the show and how it’s based on the real squadron. Boyington had something to say about that for sure, and as you might have guessed it, it’s pretty funny.

“This fella here was made for this part, or this part was made him…Robert’s doing a bang up job.” | Pappy Boyington

For those of you who are not familiar with the show, it was aired for two years from 1976 to 1978. It is a story loosely based on a real World War II squadron by the same name.

As Pappy mentions in the interview, however, they were a bunch of misfits that stayed glued together for the sake of kicking butt in the air. The show was popular because of its humor but also because the squadron used Corsairs. Loved by many, these warbirds were quite a force to be reckoned with in the air. Pappy himself became an ace in one with 26 victories, although that number has been disputed for years.