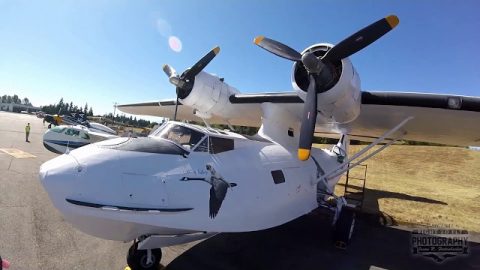 This video gives us a walkaround to the stunning PBY-5A Catalina/ Canso C-FUAW during the vintage aircraft weekend in Everett.

The aircraft was built in 1943 by Vickers of Canada and flew in operations until 1945. In 1948, it was converted into a search and rescue plane. Presently it’s now operated by the Catalina Preservation Society.

The group has meticulously restored the aircraft to its former RCAF configuration. All markings are original, and they are just done finishing installing the blisters on the back, which are gun and observation positions when they’re out looking out for enemy submarines, or in a lot of cases, down pilots, which they rescued during World War II. The plane is still a work in progress because they’re planning to add a nose turret eventually.

We highly recommend that you watch the video, as it’s an absolute treat watching these guys explain the different aspects of this beautiful warbird.