Powerful Roar Of Me 262 Engine Is Unreal 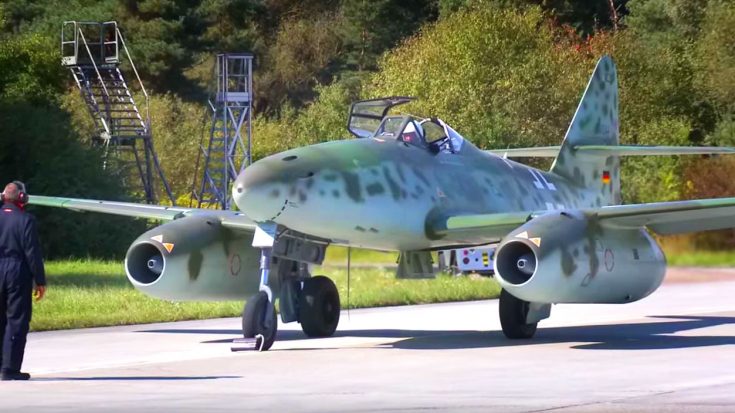 As World War II reached its final years the Germans were losing ground against the advancing allies. With many projects under development, they were forced to bring experimental weapons in a last-ditch effort to win the war. Desperate times called for desperate measures, or in this case, desperation called for the Messerschmitt Me 262.

After years of development shrouded in secrecy the Germans unveiled the first jet-powered fighter aircraft. However, the quick introduction of the Me-262 proved to have some limitations. Pilots were not given necessary training time and essential parts were limited in wartime. Despite some development issues the Me-262 proved to be a capable fighter with production numbers near over 1,400. Reaching speeds of 540 mph armed with multiple guns and bombs the Me-262 scored high kill ratios.

“By March 1945, fighter missions concentrated on Allied bomber formations. On 18 March 1945, Me 262s tore into a U.S. bomber formation, downing 12 bombers to the loss of just three jets. Despite its short time in combat, the Me 262 had proven superior to all Allied fighters, accounting for 542 Allied aircraft destroyed while losing 100.”

The Me 262 spawned many theories if it would be able to shift the war in Germany’s favor. Given proper development time and training to the pilots may have helped the Germans in battle, but the Me 262 had a more profound impact after the war. This fighter jet helped bring the world into the Jet Age and influence generations of fighter jets. The Flugmuseum proudly displays their Messerschmitt Me 262 and its jet engine still roars loud in this video.