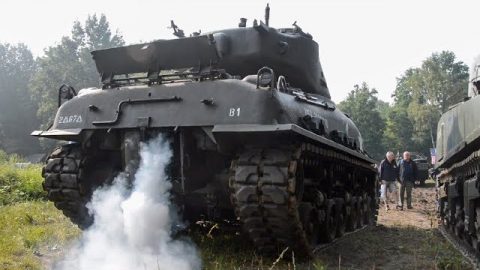 Turn up your speakers as you listen to 3 minutes of purse Sherman radial engine sound! Initially, you can hear it cold starting and revving. There’s also plenty of smoke during the start-up because of the engine’s configuration. Since it has a radial engine, when the tank isn’t running, oil piles on the lower cylinder- thus the smoke.

Sherman tanks are widely used tanks by the United States and the rest of the Allies throughout the entire duration of World War II. It proved to be highly reliable armored vehicles that are produced in great numbers.

The Sherman tank featured is the Sherman M4A1E8 HVSS 76mm during the Tank in Town event in Ghlin, Belgium during 2017. It was restored by the War Heritage Institute (WHI) to its original glory in Bastogne.