RC A400M Can Even Drop Paratroopers 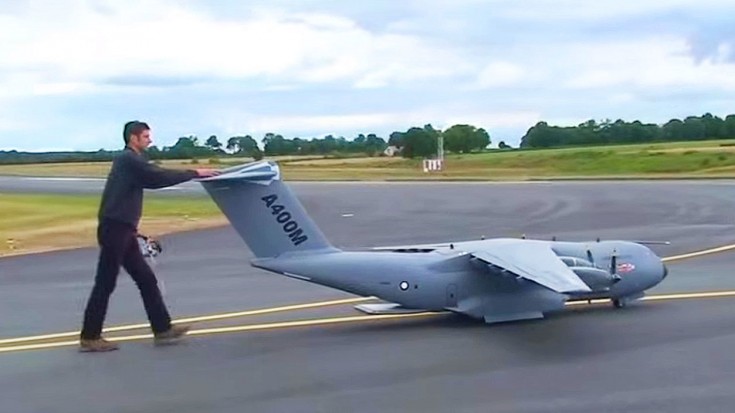 This Is Creativity At Its Finest.

You guys seem to really enjoy when we show you some innovative Rcs once in a while. We try to find you the biggest or fastest ones be they from the World War II era or not. As long as they’re worthy of sharing, that’s what we do. The owner of this giant gizmo in this video took it even a step further though.

Built and flown by a German man by the name of Hannes Heppe, this video was shot an an airshow in Grenchen, Germany. From what we gathered, this is one of the first A400M Rcs built so far and certainly the biggest.

The first A400M Atlas flew in December 2009 and is planned to be purchased by 8 different nations.

As the planes themselves are new and only 14 have been produced thus far, this is pretty awesome. Built by Airbus, A400Ms are four-engine turboprop transport aircraft with the intention of replacing the C-130 Hercules. That’ll be tough, as C-130s have proven their worth for the past 50 years, so it’s an uphill battle for Airbus.

As for this amazing Rc, Hannes took it to the next level. From the ground, he’s able to open the rear landing ramp and somehow eject paratroopers and even small cargo! It might not seem that impressive, but think about all the wiring and planning that must go into something like that.

Watch the video and check it out for yourself. It’s really neat!