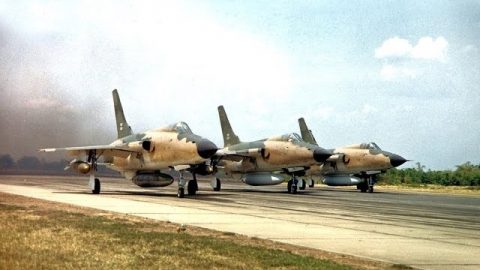 Thunderchiefs just look amazing, even from old footage. No amount of film grain and washed-out colors can erase how great it looks in the skies.

This pointy-nosed warbird was mainly used during the Vietnam War. What’s truly fascinating about this plane is its capability to carry 14,000 lbs of ordnance. It carried more bombs than the B-17, which could only bring 10,000 lbs!

These paper-plane-looking birds show how far the US has progressed with aviation. After all, who would ever expect a supersonic bomber to be that fast and carry that much load?

Imagining a fighter plane that could reach speeds of up to Mach 2.1 that could also drop bombs felt like wishful thinking. Watch them in action below.