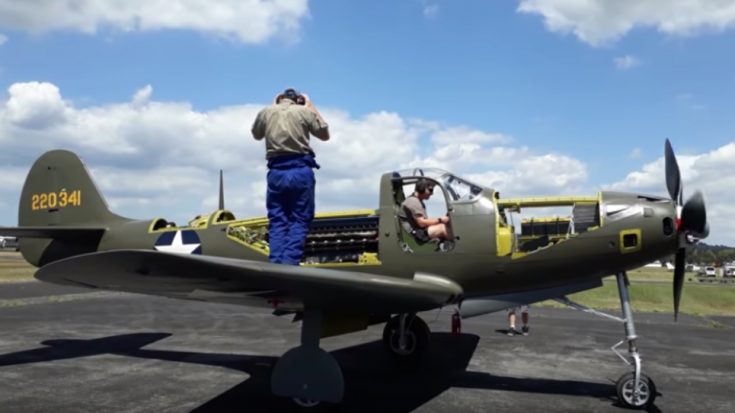 We’ve been waiting on this one for a while. The gorgeous P39 Airacobra that Pioneer Aero has been working on just had its very first engine run and it sound glorious! Owner Jerry Yagens must be doing a happy dance right now.

It Has Actual Sheets Of Lead Stacked Inside Of It

With the first test run out of the way, everyone is interesting to see how the plane will handle. Originally designed to house a 37mm cannon and 2 x 50 cal (1/2″) machine guns, Jerry Yagen’s has lead weight sheets installed instead. They did some pretty incredible work on this one, and that’s actually kind of genius.

The engine start took place on February 5th beneath a beautiful New Zealand sky after finally receiving the refurbed carburettor part they’d been waiting for from the U.S. With an engineer in the cockpit and several standing around to supervise, one engineer stood on the wing to closely watch for any issues. Besides the fact that at this stage you can still see right through the plane to the other side, she looks and sounds like she wants to get into the air as soon as possible!

New Zealand aviation fans seem a little sad, and rightly so, that this beauty won’t be staying with them much longer. The final destination will be Jerry Yagen’s Warbird Aviation Museum in Virginia Beach, but fans everywhere can celebrate that this incredibly rare plane will be the third airworthy warbird of its kind.

Honestly, we can’t get enough of it.

Watch the video below of the start-up. Make sure your sound is on!