This Sea King Crew Was Extremely Lucky Considering What Happened 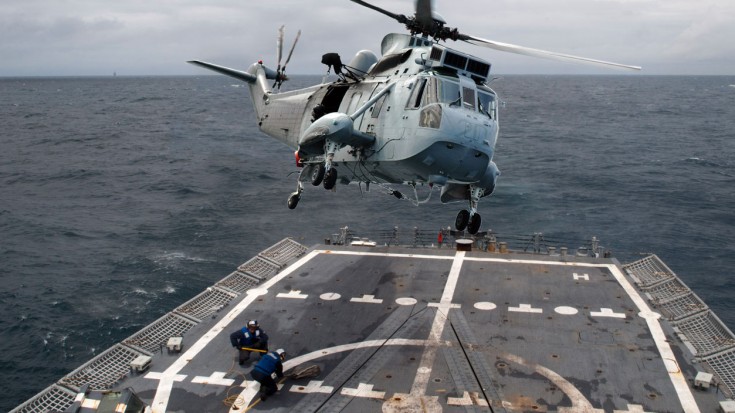 Talk About Going For A Spin.

This footage was grabbed from a Discovery Channel show called Destroyed In Seconds. Although not strictly military, in this installment they show an SH-3 Sea King helicopter attempt a landing on the pad of a destroyer. What happened next is simply crazy.

This incident happened in July of 2002 in the Arabian Gulf. After a mission, the Sea King carrying 7 people came in to land on the USS Cushing patrolling the area.

That was quite a rotor strike and with that missile compartment being hit, this could have been much worse.

Upon approach, the tail rotor experienced failure and lost power. That of course sent the entire Sea King into an uncontrollable spin. Since they were only feet from the landing pad, the pilot could do nothing. Slamming straight down onto the deck, the main rotors violently flipped the helicopter eventually throwing the whole fuselage overboard.

As scary as that sounds, however, everyone made it out alive. With the deck on fire, the ship’s crew first put out the fire for safety. Then it was rescue time.

Believe it or not, the helicopter floated on the water for a total of 14 minutes. This allowed the crew to escape and get their life vests on. The crew of the destroyer pulled up in a raft and then collected them.

Only two members of the crew had minor injuries. Judging by the footage though, you’d expect a less perfect ending to this story.