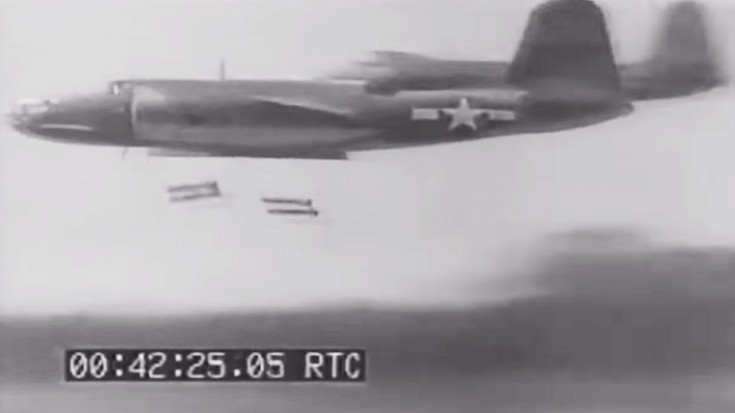 Developed By The Allies, This Difficult Technique Proved Extremely Destructive

This vintage footage is part of the Naval Photographic Center and was used to show off to the public a new technique of bombing enemy targets. The demonstration took place in Orlando, Florida, where dummy targets where placed on a field to be destroyed by a demonstration team. The planes used to showcase the newly developed technique were Douglas A-20 Havocs which were used by several Allied air forces including the United States, Soviets, Britain, Australia and France to name a few. Officially designated DB-7 by Douglas, these light bombers and intruders were often known by the names Havoc and Boston.

Skip bombing was a low-level bombing technique pioneered by Britain, Australia and the United States.

The idea of skip bombing was exactly what comes to mind, meaning, 500 to 1,000 pound bombs with four to five second delay fuses were bounced off a surface to inflict damage to targets. The method was used both on land and water and like skipping a stone on a pond, these bombs would be released at approximately 250 ft. from the surface and skip into their targets with enough force to rip them to shreds before exploding. Planes used for skip bombing included B-17 Flying Fortresses, B-25 Mitchells and like you’ll see in the video, A-20 Havocs.