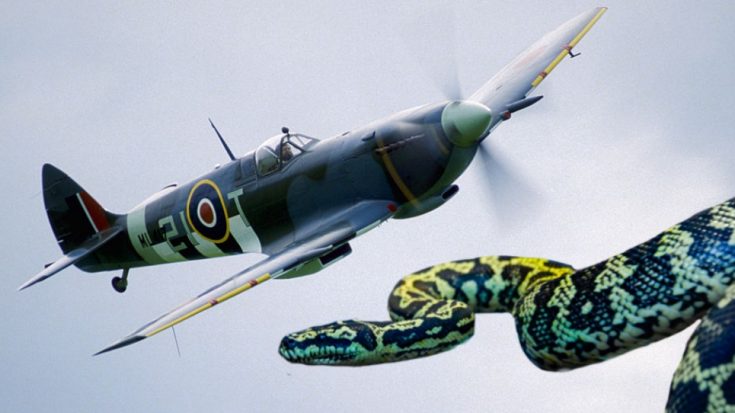 Planes and snakes don’t go together. For a pilot soaring way above any kind of surfaces snakes should be slithering over, the chances of encountering  a serpent in the air seems close to zero. But it happened to WWII pilot Dave Hastie. Here is the hilarious account of his bizarre aerial snake wrestling match.

One fine morning, Dave took off on patrol in his Spitfire as he usually did. Reaching about 10,000 feet, he glanced at his instrument panel to see quite a big surprise: a two foot snake stretched directly in front of him.

So, what did he do? Incredulous, he radioed, “I’ve got a snake in my cockpit!” And as you might expect, the unusual circumstance called for at least a bit of humor. “Put it back in your pants!” was the quick reply. Obviously no one was going to be of much help.

The One Handed Snake Wrestle

Hastie thought with haste. If he needed oxygen assistance at this high elevation, the snake probably wasn’t feeling that energetic. He waved his gloved hand over its head. No response. Snatching it up with one hand, throttle in the other, he held the snake firmly by the throat as it wrapped its body around his arm.

Sometimes a person experiences something so unique in life that the story gets to be a part of the individual’s identity. This is definitely the case for Hastie. Long after the war, this would become one of the stories everyone loved to hear the most. But there is something he regrets; he threw the snake out of the plane!

And, he says, with all that happened to him, “It was one of the minor episodes in my life.” What an incredible guy!

Watch the full interview to hear his unforgettable retelling.