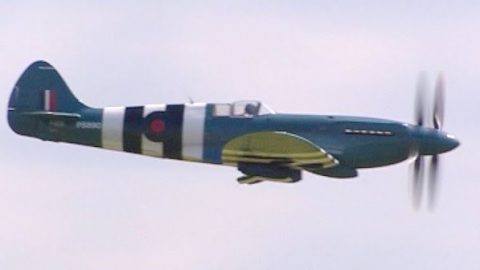 An incredible Mark 19 Spitfire with two propellers was seen at the Flying Legends Airshow at Duxford in 2005. The owner Cristophe Jacquard discussed the difference of the aircraft with the other Spitfires.

“Normally, you need about 280 knots at the bottom of the loop for an example, with this one, you can do 250 that’s enough, and at the top of the loop, you still have 120 knots.”

The Spitfire, also known as Supermarine Spitfire is the most important British single-seat fighter aircraft that was used by the Royal Air Force and other Allied countries before, during, and after World War II. Using several wing configurations, it was produced in more variants than any other British aircraft.

The version of the plane that fought in the Battle of Britain was powered by a Merlin engine of 1,030 horsepower. It was until the late 1943, when Spitfires powered by Rolls-Royce Griffon engines were developed as much as 2,050 horsepower and began entering service.

See how the aircraft fly and hear its amazing sound in the video below.