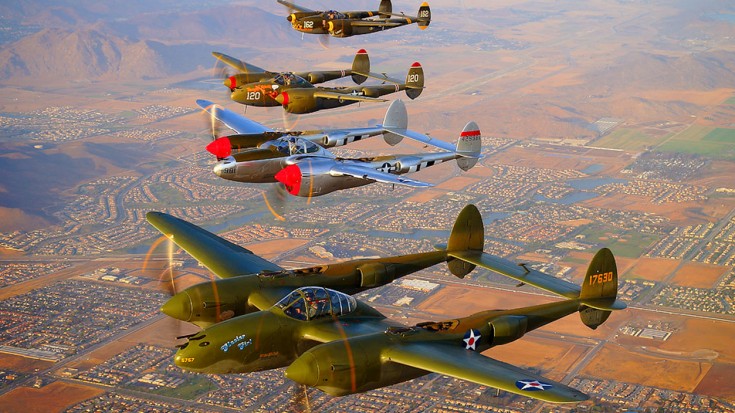 That Is One Lightning Show You Want To Be Outside For

In 2013, The Planes Of Fame Airshow brought us this rare footage. With only 9 airworthy P-38 Lightnings in the entire world as of this writing, it’s a pretty awesome sight to see five of them in the air at the same time. These warbirds flew in from Texas, California and Oregon and put on quite a show. Most of these girls have some stories behind them, but none as great as Glacier Girl, who as the name indicates, was recovered from Greenland after being covered by ice for over 50 years.

Here are the Lightnings you’re going to see:

The P-38 Lightnings were fighter planes developed by Lockheed and introduced in 1941. Named the ‘fork-tailed-devil’ by the Luftwaffe, Lightnings were so effective that they were produced throughout World War II. Over 10,000 were manufactured between 1941 and 1945 and were known to be extremely forgiving in inexperienced hands. Their most successful combat performance took place in the Pacific Theater, creating quite a few fighter aces such as Richard Bong and Thomas McGuire who had 40 and 38 kills respectively. Before the appearance of P-51D Mustangs, they were also used as long range escorts on bombing missions. (image source: http://warbird-photos.com/ImageTemp/Aviation-PlanesofFame2013-D1_P-38_Lightnings_8881.jpg)