Wax On. Wax Off: B-17 Ball Turret Maintenance 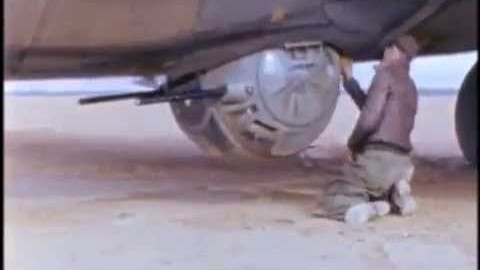 This rare color corrected footage features a young B-17 ball turret gunner doing what he was trained to do. Making sure your turret was well maintained prevented any sort of jams, something you definitely didn’t want during combat. Designed by the Sperry Corporation, ball turrets were widely used on bomber aircraft during World War II. A defensive device, ball turrets were equipped on the B-17 Flying Fortresses and B-24 Liberators.

Small in design to reduce drag, the ball turret position was typically reserved for the smallest man in the crew

The job of a ball turret gunner was not pleasant to say the least. In layman’s terms, you’d literally hang from the belly of the plane while in flight which is scary to say the least. To make things worse, planes such as the Flying Fortress were typically sent into flak infested regions. That means that while you were in there waiting for intercepting aircraft to start shooting at you, you were constantly worried that a piece of flak might come right up through you as well. Although getting into a B-17 was a hazard in general, getting into a ball turret was a whole thing all together.