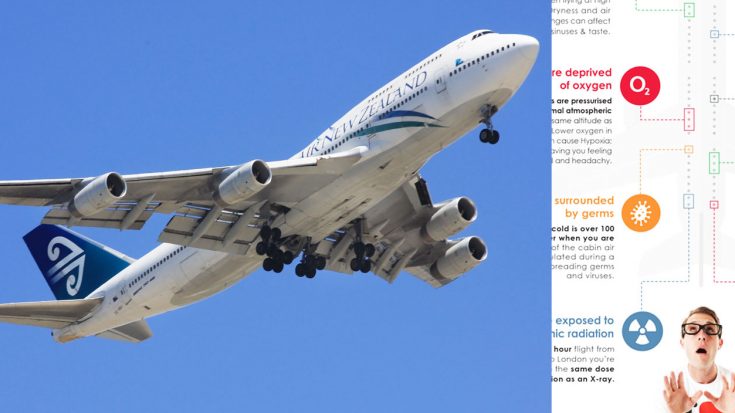 Most people can’t avoid flying. Whether you’re a seasoned traveler or are afraid to step through those doors every time, you’ll find that flying is inevitable in today’s day and age. As it becomes cheaper and life and work separate families across the world, you’ll be flying to see them one way or another.

Although airlines do their best to keep flying safe in every aspect, with 1.73 million passengers flying in the United States every day, someone’s bound to be sick; and spread it to you.

A recent study by TravelCompareInsurance concluded that passengers are over 100 times more likely to get sick on aircraft for a number of reasons. Some of them are commonsensical as you can imagine.

For one, being in a fuselage, meaning, confined space, is like being inside in a Petri dish. One sick person sneezing or coughing spreads germs like those 50s commercials enticed you to get morning coffee. The travel across the whole fuselage and grab you right by the throat, which brings us to air circulation.

For one, it’s said that cabin air gets recirculated 20 times per hour which is much better than the 12 times per hour its circulated in an office building. Buildings, however, are bigger. Also, add to that the dryness in the cabin as opposed to any other confined space and you have a recipe for disaster. The humidity is kept at below 30% during flight, an environment in which viruses and bacteria thrive.

Then there’s the water. We’re not trying to scare you here, but a study performed by the EPA in 2004 cited that 15% of aircraft water tested positive for e-coli. This is due to the fact that water tanks are right next to the sewage tanks on aircraft and also due to some carriers filling up the tanks at foreign airports where the water is less regulated. Our tip here is to only buy bottled water and never get coffee or tea as that water comes from those tanks and isn’t fully boiled.