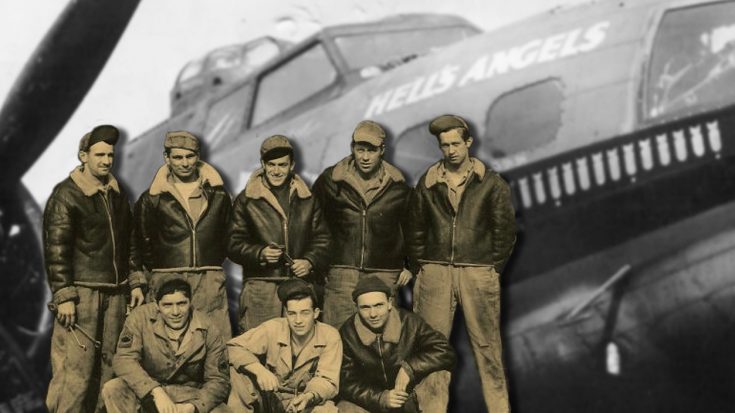 They Very Much Knew It.

War is hell. Some of you who are veterans have been through that hell yourselves while others can only imagine what it’s like to be shot at; to know what it’s like to lose someone who you knew had your back no matter what happened.

Most of us (readers), however, had to get into a bomber during World War II and fly over German-occupied Europe. That’s not to diminish the valiant efforts of the brave souls who fought in other theaters of the war, but statistically bomber crews in Europe had the worst chances of survival.

Take a look at one single air force, for example, The Mighty Eighth. We’ve dug through archival statistics for the B-17 bombers that took part in day bombing raids and the number was 71%. Almost three-fourths of the crews who left that base were either shot down or missing in action. To put that number into actual casualties, it comes out to about 50,000 airmen lost. These young men were between the ages of 18 and 24 and they lost people they knew on a daily basis and sometimes in the most horrific ways. Having read historical books and first-person accounts of aircraft dropping out of the sky, we know there were many cases of seemingly lucky young men bailing out of burning aircraft to save their lives only to be cut up by the propellers of other bombers in their squadrons. Those weren’t isolated cases. These sorts of awful things happened constantly.

That brings us to the original point. What kind of mindset did you have to put yourself in to step aboard one of these bombers?

We’re not trying to get emotional or philosophical here, but being at an age where you still don’t know a lot about the world (from today’s perspective at least) and having the sense of duty to do what your country expected of you knowing you most likely won’t come back is unprecedented.

Statistically, every mission you flew and had the luck to return from there was someone you knew who never made it back. So, in order to climb into that bomber and start your mission, you had to surely accept that you’re probably going to die.

As of this writing and the latest research conducted in 2017, there are still 558,000 veterans of World War II alive today. They’re not all airmen, but if you know one, there’s a great chance they won’t talk about their experiences in the war. It was just that horrific.

Here at World War Wings, we’re honored to say we’ve done a lot of research pertaining to World War II aviation and beyond, and we found just a handful of accounts where a B-17 crew member actually opened up about what he went through. You can see a clip of that interview below. This man, after 75 years, starts crying just thinking about flying over Germany.

That’s the thing about history being crunched down to numbers and statistics. It all just gets lost somewhere along the way and people don’t realize what these service members really experienced. It was just a big war. It must have been tough.

Most people nowadays have no idea of the gravity of horror these men faced. Most of them accepted it though and did what they had to.

For that, we thank you.